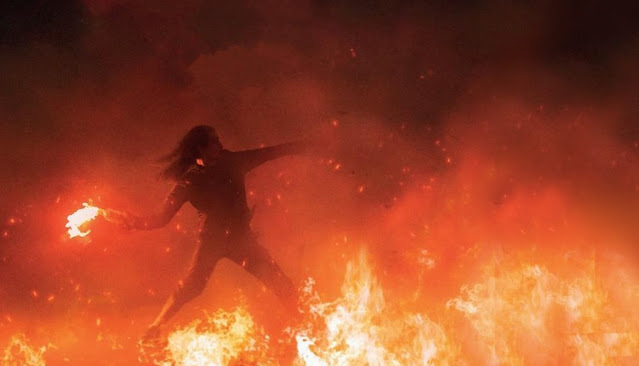 Action/ Drama/ Thriller
Rated 15
Netflix
Spoiler Free
Opening with the most intense, visually striking and thrilling scene I’ve experienced in ages, Athena had me by the balls from the get go. It is a “one shot”* masterclass, and I’ll openly admit my main concern was that it would be a glossy gimmick, the bar set so high so soon. It had me wondering what more the film could offer. Turns out plenty but somehow not enough for greatness. Perhaps.

In the aftermath of an apparent racist killing by police in Paris, the banlieues (Athena, precisely) literally catch fire as a civilian protest becomes an all-out assault on the five-o. Three brothers of the murdered man form the intertwining triumvirate of stories. I’ll get the obvious out of the way here, Athena is comparable to La Haine in its subject matter but isn’t anywhere near it in its power. La Haine is stylish, ghetto philosophy, this is a wonderful, operatic pop video; in the ghetto.

That’s not to diss Athena, it would be very difficult to get the substance to equal its style, such are its astonishing achievements aesthetically. You can tell the director, Romain Gavras, makes adverts and music videos too; this amount of eye candy is nurtured massively in those artistic arenas. With its music and its staging, Athena is a cinematic trip- unrivaled cinematography, staging and almost Sci-Fi like, with fireworks for lasers as the citizens bombard the authorities. 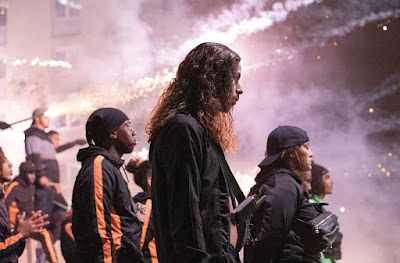 Athena’s narrative, such as it is, didn’t grab me or shock me but I didn’t really care because it was so much fun to look at. Perhaps there is more to it than I was able to ingest, but it feels a bit like they came up with the concept first and the story second. Much like a perfume advert, which by the way I think are the hardest adverts to make because you’re selling a smell, Athena sells smells and sights and melodrama directly to your eyeball. My only regret is I’m not fluent in French and thus my eyes had a minor distraction from the rest of the screen.
Bedsit it?

Anyone hoping for a 21st Century La Haine should shelve that fanciful wish. There will never be another La Haine. While Athena is stylish and slick, it isn’t deep. It is, however, one of the best films I’ve seen this year and a story I’ll definintely return to. An 8/10 that I feel might go up with more viewings.
*Stitched together brilliantly with CGI one imagines, to look like it's one shot.