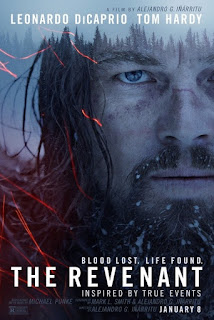 Premise: Semi true story of Hugh Glass (DiCaprio), a frontiersman working with fur trappers, who after being mauled by a bear, is left for dead. He survives and embarks on a revenge mission in the harsh, violent environment.

Delivery: I was a big fan of Amores Perros, coming across it while at sixth form, and so have always been keen to see any new Alejandro Iñárritu films. He made his English language debut with the somewhat self important 21 Grams, which for all its overemphasised emotion was still inventive and interesting. Babel had some wonderful moments and Birdman was the same, all of these films are well worth checking out. Inarritu is clearly a brilliant and talented man, but one who admittedly does sound like a bit of a prick to work for. What's particularly notable when looking at his body of work, is how he has moved from intricate, interwoven story-lines to much more stripped back narratives, told with the same panache and ingenuity.

Right from seeing the trailer for The Revenant I thought there was no way I could fail to love it. The opening scene is almost as shocking and arresting as Saving Private Ryan's Omaha Beach, with an immersive, incredible attack on the fur trapping party by natives after the bounty that is their pelt haul. The brutally real violence and the beautiful cinematography are an odd couple, but one which really works. Emmanuel Lubezki, who also was the cinematographer on Children of Men and Birdman, produces stunning work yet again, he and Alejandro make a great team. There's no ceremony in the reality of the on screen death; some people die without a whimper, some die screaming in terror and agony.

I'm aware I have covered quite a lot of death on Bedsit Cinema recently. Quite what that portends for my sanity and/or readership I don't know, but my last attempt to switch it up and watch a romance ended in utter failure, and I'm pretty sure is what kick started this menagerie of the macabre. Quite a lot of the reason why I'm solely watching brutally violent, slightly arty films is the only other option seems to be superhero films or musicals for kids. A very depressing state of affairs, and one hopes a renaissance of ingenuity is inbound. We're more likely to see a nuclear war, first, though.

The Revenant is basically a three hour chase film, which is not a criticism. So is No Country for Old Men, and that's a wonderful film. There's beauty in the simplicity. What struck me watching again for this review, was the clash between man and nature which lies at The Revenant's heart. The difficult, at times unhealthy relationship between man and his surroundings, and his fellow man. As DiCaprio and Tom Hardy, who plays the antagonist John Fitzgerald, murder, kill, claw and continue breathing any way they can, it is as exhilarating as a real life chase, only while you're in no physical danger, sat on the sofa and scratching your bum.

Bedsit it? Watching The Revenant for a third time in the the two years since I saw it at the cinema, I realised it's got some legs, I never normally can countenance that amount of viewings of a film, that quickly. The performances fit the presentation and the action is both repulsive and entrancing. 9/10
Labels: Action Alejandro Iñárritu Bedsit Bedsit Cinema Chase Film review Leonardo DiCaprio Movie Reviews Oscars The Revenant Thriller Tom Hardy Violence Western