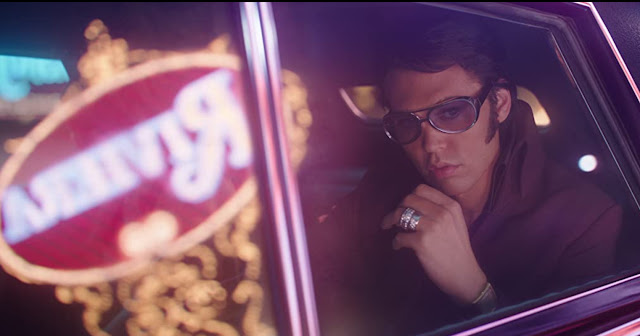 Ready for anything given it is basically a musical, I rented Elvis for a couple of quid from For Your Eyes Only in Forest Hill. I know I’ve mentioned them before, but For Your Eyes Only is one of the last physical media rental places in the UK and a few months ago had an unattended car barrel into the shop. Fortunately nobody was hurt but the shop front (and inside, and middle) was wrecked. Thankfully they’re back, and Elvis is a great example of why a shop is superior to online*- Elvis is currently a £13.99 rental on Amazon.

Although it is upbeat, Elvis does serve up a scumbag for the ages in Tom Hanks’ Colonel Tom Parker; a vile, greasy palmed conman who got onto a good thing and leeched off it for life. He’s the lens through which we see Elvis’s existence, coloured with his own wonder, business brain and green eyed cynicism. While awful, and as my girlfriend pointed out it’s hard for one’s brain to calculate seeing Tom Hanks play unlikable, this perspective is perfect for the storytelling.

Austin Butler does a wonderful job as Elvis, though he sounds dubbed or a little too on the money at times. He looks perfect- Elvis isn’t aged to reality in the film, Butler retains his beauty. He’s nowhere near the gnarly, bloated ghoul of a man who crumpled on the crapper. They eventually plump him up a bit, and he’s sweating like a pregnant nun once he gets to Vegas, but he’s always sexy, unlike the real McDeal. Picking needle holes, though, given the point of the film.

There’s admirable depth in the cast I ain’t going to cover because I’m taking care of business with a film review. They all dance in and out to tunes which are wonderfully wrought into its essence. I liked the cast, basically. 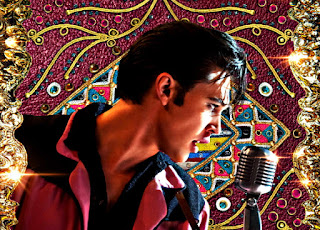 I’ve seen comments that Elvis glosses over some of the morally dubious actions of Elvis Presley. Given that this is directed by Baz Luhrmann, of the brilliant Romeo + Juliet, and I’d read those comments, I wasn’t expecting Elvis to be an expose. Moreover, I didn’t want Elvis to be an expose. Call me a big softie if you want, but you’d be wrong because I’m a teeny tiny human man and I’m only half soft because I’m injured and like Five Guys. I wanted great music and an engaging biography. I got that. You will get that.

The film makes Presley out to be an almost Ali-esque in his social justice bravery, and perhaps he was vehemently anti segregation and tuned into political issues, I don’t know. It felt, however, a little like some depth to the high notes of his razzamatazz lifestyle and music. Talking of showbiz, with Elvis, Baz Luhrmann has mined every inch of his colourful, contemporary creativity. The film buzzes, both through its beautifully constructed visuals and utterly iconic music.

I’m no Elvis geek, that much is clear. I liked the collaborations he did with 2Pac but that might have been a deep fake. This is sweeping, sexy, sing song cinema which may or may not hinge on whether you like Elvis Presley’s music. Disclaimer, it is musical cinema, not a musical. Elvis never stops for a song, it is one long, sumptuous song. 9/10
*Other examples: talking to humans is better than talking to algorithms and when the internet goes down you’re all fucked if you don’t have Blu Rays and a player…