3D Or Not 3D? The Dimensional Dilemma 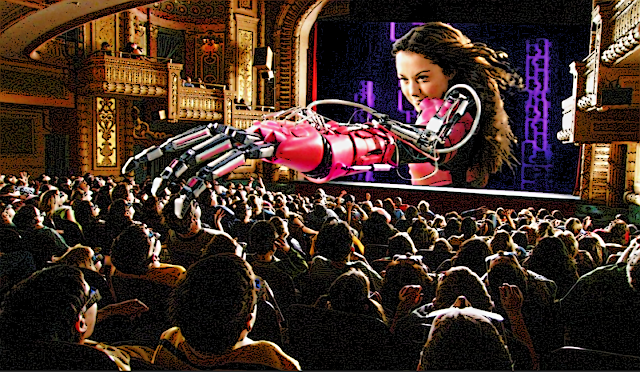 With Avatar: The Way of Water, which may or may not feature feverish, slippery, sex scenes with Sally Hawkins, due to hit cinemas later this year, the 3D debate has begun afresh. Some people love the format and either more people hate it, or are a lot more vocal, because 3D does not seem to be something many are excited about. There are reasons to hate 3D, but there’s plenty to love about it, too.

When I was a child, (which was mostly in the eighties but eventually I got pubic hair and I now have a job and stuff) 3D was a tacky gimmick using one red and one blue lens on thin, card glasses. These glasses could really only be used in a very basic way in the cinema, for one off shots with something COMING RIGHT AT YOU for a bit of a jump and something slightly different visually.

Virtual reality movies will surely happen at some point and I’ll be desperate to watch one, at home on my own; they’ll not be a group experience. 4D is a bit of fun but I don’t have the energy for that every week. I would like to see a film with some aerial combat and dogfights in 4D though.

My love of 3D really starts with Avatar, James Cameron’s box office record breaking, monumentally expensive, eco-warrior environmental analogy. I saw Avatar in the cinema in 2009 when it came out and I was blown away. It was the first film I had seen in the “new” 3D guise and it really kickstarted the revolution; every Tom, Dick and Harvey wanted in and the rush to the format forced some major errors. Avatar used 3D to build its Sci-Fi other world, Pandora, and immerse the viewer in its beauty.

A stunningly well-designed film which on repeat viewings loses most of its appeal because let’s face it, the story is bang average; 3D made Avatar what it was- a groundbreaking cinema experience.

In its aftermath, the problems crept in. Clash of the Titans could have been fun in 3D, if they’d actually shot in it rather than used the crass overlay which was not just ineffective but wholeheartedly annoying on the big screen. Follow up, Wrath of the Titans, was a good film and with better 3D but it was a bit late by then. The inauthentic, replicant third dimension which was added only to prise pounds from people’s purses is what rankled and I believe that those films were largely subpar meant people associated the poor films with the technology.

Continuing a brief run through of the issues taken with 3D, in the interest of balance: the slew of compatible and pricey technology needed for home viewing, vague snowflakery about feeling dizzy, wearing the glasses full stop and the cost of it all. Mostly understandable complaints. Mostly. My point here is that yes, there were lots of cynical money grabs and some well-intentioned duds but when done right 3D is a brilliant enhancement of film. It heightens the senses and adds an X factor that it is hard to replicate at home. Even in the Bedsit Cinema with my 3D TV*.

Despite this, when done well, 3D does make the cinema more exciting. Here are some of the better efforts (I’ve seen- not an exhaustive list).

Avatar is the OG, though I’d put Gravity in here for another film which was essentially a paper thin plot elevated by being a visual treat.

Final Destination 5, a perfect example of when the extra dimension just makes the carnage more crazy. Who doesn’t want to see people going splat in 3D? When they get the trashy element right, making you wince, as much as 3D is about layers and depth and just feeling a part of the world, it is also about having fun. This is gleefully gross.

Dredd, a jaw droppingly good Sci-Fi action with plenty of ultra-violence just made all the more amazing to look at in 3D.

Everest, mountains, caverns, weather! Your brain won’t know whether you’re going up or down.

Man of Steel, you’ll believe a man can fly, and that you are flying too. Very, very cool on a humongous screen.

The Hobbit Trilogy, for world building, why would you not want to see Middle Earth bolstered for your eyeballs?

Sin City: A Dame To Kill For, already stylised, the Sin City sequel pops in 3D.

Saving Private Ryan, alright it’s not a 3D film but I used the convert button. Spielberg is on record as always trying to have depth of field in his cinematography so it works well- but I’d like Saving Private Ryan upside down and in reverse.

Also the Holocaust. Nobody has attempted this that I know of, even me on the telly, but I can’t think of a less appropriate subject matter than a Holocaust story for 3D.

3D is meant for the cinema, it is a way of elevating it back to the vaunted glory days of an actual event, a treat, and something you concentrate on for two hours without looking at your damn phone. Because you can’t because of the glasses. 3D can be spectacular and it can be silly but either or both are fine with me. I love it and welcome it back with open arms and wallet.