Bruno Ganz's Hitler and the Problem of Evil 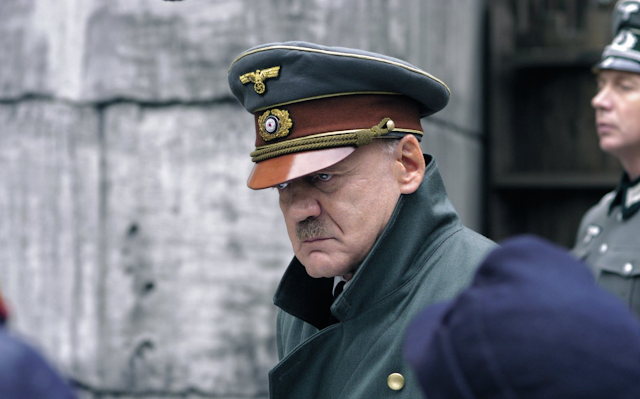 Downfall (2004)
“What Arendt meant in saying that evil may be banal, was simply that it need not be demonic.”
Susan Neiman, Evil in Modern Thought

Downfall (Der Untergang), is set in Hitler's bunker under Berlin as the Third Reich's enemies close on his stronghold. His forces capitulate under the weight of a Russian Army hell bent on marching Nazis down and inflicting on Berlin a similar fate to that of Stalingrad; a conflict where almost two million people perished.

The losses begin to crush Hitler's previously unwavering pride, his leadership descends into mania and his ideologies wither as conspicuously as his combusting body.

In Downfall, Adolf Hitler is portrayed by an actor born in Switzerland. Bruno Ganz, already a big name in German cinema having acted in films since 1960, was not particularly well known in the cinematic, or Thespian world beyond that region. Ganz's performance as the infamous dictator catapulted him into that stratosphere and far beyond. The actor died in 2019, at the age of seventy seven, and his Hitler will probably be regarded as the definitive portrayal of the man for many, many years to come.

The "problem" with Downfall, and certainly with Ganz's Hitler is a fascinating one; one worth revisiting, as it carries weight throughout cinema and with current premiers attempting apparently to emulate The Führer. Downfall's dictator, in one of the Adolf's favourite philosopher's (Friedrich Nietzsche) words, was human, all too human. Hitler's evil was one which was, for many, too close to home. His wickedness could not be seen as emanating from someone as fallible and fragile as other corporeal beings. As human, as us. Hitler could not have joys and loves. Hitler was a monster, a supernatural, wicked force who existed outside of normal existence. To see him otherwise was offensive, to some people.

Herein lies the problem of evil in film, as viewed through Bruno Ganz's on screen manifestation of Adolf Hitler.

Cinema, and by extension many cinemagoers, has a very black and white relationship with evil. A problematic discord on the discussion, though not an issue unique to cinema. Hannah Arendt's Eichmann in Jerusalem saw the Jewish philosopher become perhaps the 20th Century lightening rod for the issue of discourse on the subtleties of sickening deeds. Covering the trial of Eichmann, who was guilty of signing off the deaths of thousands of people in death camps during WW2, Arendt described the malicious pen-pusher's brand of cruelty as “banal”. It was an adjective widely reviled. Eichmann's defence that he was but an administrator helps better understand the picture of the ordinary, boring evil person. A man guilty of wickedness outside the realm of understanding. This is what Arendt referred to, not a dastardly deity. The portrayal of evil in films has almost always been one of either supernatural or seductive and salacious. There is very little wiggle room in screen-writing and film-making for grey areas on the subject it seems. Although successful films Dead Man Walking and No Country for Old Men had evil characters with more depth to them in Matthew Poncelet and Anton Chigurh, neither fictional* character was as reviled as the real life murderer of millions. Adolf Hitler and by extension, Downfall and Ganz were the subject of much angry protestation. Around the world, criticism rang out against this awful crime. In Germany itself, where Hitler remains something of a national source of shame, there was perhaps the most vociferous malcontent. Ganz understood this, telling The Independent,

"We've internalised a kind of taboo against playing him." 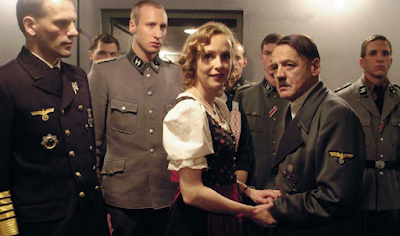 Downfall is the first German made film about Hitler. In Germany sales and copying of Hitler's biography Mein Kampf was heavily restricted until 2016. This is faintly absurd, as any sane person reading it can immediately recognise the lunacy and conflict in Hitler's writing. Better the devil you know. Knowing, however, is what this problem of evil on screen boils down to. Many do not want to know, do not wish to see the humanity in the atrocities of the worst people. But to make monsters of the wicked, the evil, almost excuses their actions by denying their humanity. It is to say that they are capable of such things because they have other-worldly qualities which good people do not, and thus distance them from ourselves. Do not forget, Hitler was voted into power, adored by many and the atrocities in his name went largely unchallenged for a long time.

“Hitler was, after all, a human being, even if an especially obnoxious, detestable specimen. We well know that he could be kind and considerate to his secretaries, and with the next breath show cold ruthlessness, dispassionate brutality, in determining the deaths of millions.”

Ganz was a brilliant actor, an exceptional talent. His research into Hitler's final, miserable malaise; into his foibles, loves and his attention to the minutiae of the dictator's ill health produced perhaps the greatest screen villain of all time. In Downfall we were given by Ganz not only the peerless presentation of a real life monster, but a jumping off point for one of the oldest philosophical and theological debates of all time- the problem of evil.

Bruno Ganz will be sorely missed, both as a person and a performer,. Through Downfall, his Hitler may just help cinema to explore evil with more nuance and a greater willingness to understand the monstrous deeds done by those who share our breath. The evil that is human, all too human. That is a wonderful achievement for an actor, a long lasting legacy: let's not drop the debate or forget Downfall's entry into it.

*Sean Penn's Matthew Poncelet was a fictional character based on Robert Lee Willie, an important distinction as it separated the film's character from the atrocious acts of Willie in reality.