“Welcome the fuck back”

Deadwood: The Movie’s poster knew exactly who it was coming for- Deadwood fans and Deadwood fans alone. The two hour, HBO Movies production is not here to create new business, it has been made to tie up the storylines of the brilliant, occasionally wonderfully, willfully obtuse TV show. If you haven't seen the show, you need to, you absolutely need to.

Brought to a sudden and vociferously protested end after three seasons, or three series to us Brits all the way back in 2006 Deadwood was mourned. Thirteen years of fan campaigns, aligned with actor desire (and availability) successfully resurrected David Milch’s sweary, stylistically Shakespearean western.

Creator Milch wrote the film, and established TV director Daniel Minahan (Game of Thrones, House of Cards) in the chair. It’s evident early that Deadwood: The Movie has a notably larger budget than the show, used mainly, and to good effect to establish the expanse in the titular “camp”. 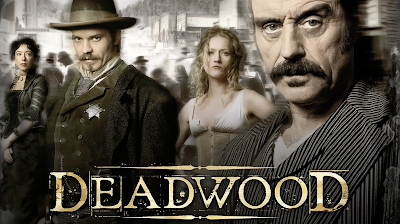 While there is an effort made to make Deadwood: The Movie at least something of a standalone film, the flashbacks and exposition are really there to remind the viewer what happened thirteen years ago. The plot is no more convoluted than that of all Deadwood’s hens coming home to roost. All of the main, still living, characters converge to fire up old grudges and rekindle old friendships. As one would expect, there’s flowery fucking language, and liberal use of cocksucker. There’s also violence, treachery and nudity; exactly what was in the show.

By moving the story on, one suspects largely due to how visibly some of the actors have aged, there is a wistful feel to this production, an air of sadness and finality. That doesn’t mean that the action suffers, there’s plenty of pain in varying forms, but Deadwood: The Movie, is clearly here as a show closer. This is not a film for new viewers- they should head back to the start of Season One.

Fans will not have any expectation for more from these characters and storylines, as Milch ties the town’s tales up conclusively and in places rather touchingly. Deadwood: The Movie serves two purposes, to entertain and to end; it manages both. While it is sad to say goodbye, it is fantastic to enjoy that closure. 9/10, but then I'm a fan.