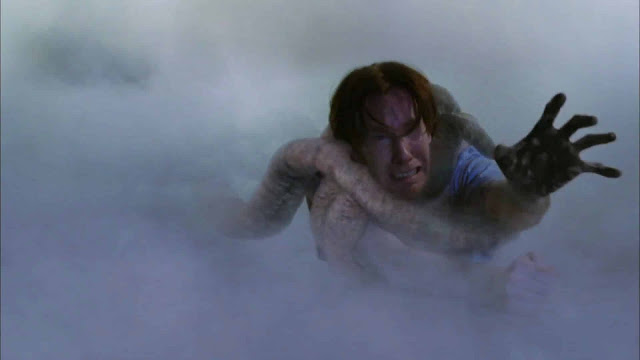 The Mist director Frank Darabont has Stephen King big screen adaptation form with his brilliant Shawshank Redemption and The Green Mile films. When making The Mist he had quite a strong hand creatively and apparently he fought for two things; he wanted the ending he wanted, and he wanted the film to be released in black and white. He got one of the two and despite this being far from my first time watching The Mist, it was my first time watching it in the monochrome Darabont intended.

After a violent storm, a mist descends on a small town, trapping people in a supermarket as murderous beasties hunt in the fog. So far, so bog standard creature-feature, right? Well, as I said, The Mist is based on a Stephen King novel, and directed by Frank Darabont, so hold on to your judgement. King is almost unrivalled at conveying how humans interact and react, and that is The Mist’s greatest strength. It might be horror/ Sci-Fi but man do you believe what is going on, as the terror creeps into the crowd, trapped and slowly being killed off.

Leading man Thomas Jane plays handsome, nice, regular guy David very well, but in his shadow lurks the malicious, conniving Mrs. Carmody (Marcia Gay Harden- who is superb).The group slowly splinters, their solidarity shorn apart by fear and the fervent Carmody. She’s Old Testament, which is fine except she also thinks she is God, which is not. Her zeal converts some of the terrified into zealots and inside the store fast becomes as dangerous as outside. Despite this, the film isn’t really about religion, but it is critical of what religion can become in the hands of toxic humans. 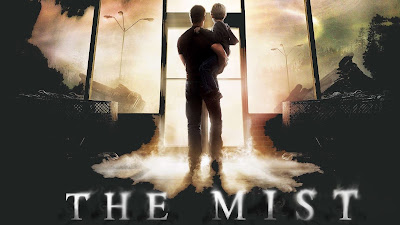 While the events in The Mist might not be believable the people and their reaction to the events 100% are. Because they’re scared, you’re scared for them and you buy into it. So enamoured with this feat of storytelling, at university I lent a copy of The Mist to my philosophy lecturer by way of reference for a completely grounded essay I wrote reimagining Plato’s The Republic in a zombie apocalypse. She didn’t watch it, although I doubt that’s the reason for the poor mark I got for the work. “I said be creative, I didn’t mean that creative.”*

Greyscale gives The Mist a romantic air, makes it feel less real and more B-Movie even though it is still shocking and utterly involving. The CGI has aged a bit, but the black and white dampens that and the creatures are still all the stuff of nightmares, as are the various ways people are killed by them. H. P. Lovecraft would have had an orgasm seeing the monsters in The Mist. I got close but my phone rang and it totally spoiled the moment.

Talking of endings... and so, to the ending. The ending of The Mist is brilliant, and I can’t thank Darabont enough for sticking to his guns and fighting to keep it. It turns a very good horror into a brilliant one.

This isn’t just one of my favourite horrors ever, it’s becoming one of my all time favourite films. I think this viewing has nudged it way up the list. The Mist isn’t perfect, but it is scary, it is brave, it is unique and I love it more than ever. 10/10

I love horror, and if you do too, try these reviews!..