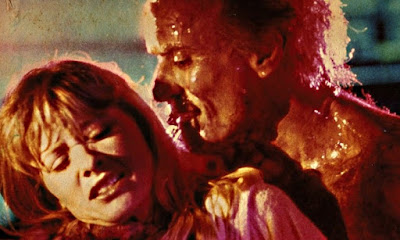 I love a Stuart Gordon film. If you haven’t seen Re-Animator or Dolls, I strongly recommend seeing them. To be honest even Gordon’s Christopher Lambert starring Fortress is a good Sci Fi (rather than horror) watch. These films’ practical effects creativity is so much more original than today's often lazy CGI world. In my opinion anyway. They’re cleverly executed and charmingly entertaining. It isn’t even nostalgia; I was four when From Beyond hit the cinemas and my parents wouldn’t let me see it.

From Beyond had been on my Netflix watch list for some time. Based on an H. P. Lovecraft story, who was an absolute genius of the bizarre and horrific, the film modernises the text but retains and perhaps enhances the preposterous premise. It’s almost irrelevant telling you what it is about, but it is kind of what Bedsit Cinema exists for and because of that, here goes: machine invented to see beyond this reality. Goes tits up. There is gore, and tits.

Obviously it’s absolute nonsense, completely bonkers, but I could not be clearer about this- a man’s face rips itself apart. Itself, no help. Who doesn’t want to see that? I’d let my four year old see it. Goddamned parents.

Tortured doctor? Check. Hard man who’s most likely to die (not least because he’s black)? Check. Scientist who is clearly very hot but they’ve tried to make look like a bookworm without success and is odds on to get her kit off? Check.

The acting is exactly what you’d expect, deliberately camped all the way up to 11. These actors have gone on to prove they can convey emotions more sincerely; but that would not be in keeping with the rest of From Beyond. All the central thespians will be recognisable to devout horror hounds. Jeffrey Combs (Re-Animator, The Frighteners, House on Haunted Hill), Barbara Crampton (Re-Animator, Halloween 2018) and the illustrious Ken Foree (original Dawn of the Dead and now Rob Zombie favourite).

Bedsit it? Giddy, camp, bloodthirtsy fun, From Beyond will probably be enjoyable for anyone who liked The Thing. It won't make your year, but it will make your Friday night paired with a few tins of lager and a curry. 7/10
Labels: 80's Adam Thorn Bedsit Cinema Body horror Camp Eighties From Beyond Gore Horror Horror hound Jeffrey Combs Practical FX Re-Animator Retro Review Stuart Gordon