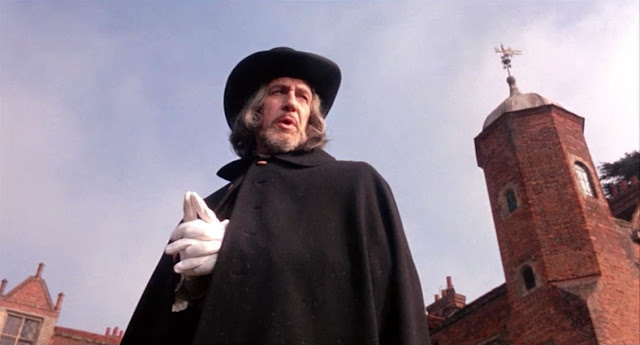 Witchfinder General was the final film in the very short career/ life of Michael Reeves, the enfant terrible of (cult) 1960’s British cinema. Reeves died at twenty five of an accidental, recreational drug overdose. As a film student (a two year stint spent playing rugby, getting wasted and watching obscure films- rather than any discernible academic learning) in my late teens, I read somewhere that Witchfinder General was a classic made by a young genius. Because of this, I spunked about £20 on the DVD from the BFI. Thanks student loan!

I still have said DVD, although I can only recall watching it once. It is genuinely about as old as DVDs themselves.

Hammer Horror/ British screen legend Vincent Price, in something of a coup for the production, plays real life figure Matthew Hopkins, who was the (self appointed) Witchfinder General in 15th Century England. What was a Witchfinder General? As far as I can ascertain, a completely pointless murdering bastard who somehow got paid to “try” suspected witches. That’s in real life, in the film Price’s Hopkins is every bit as bad as the actual man sounds, only unfortunately he’s surrounded by camp acting in a dated movie. 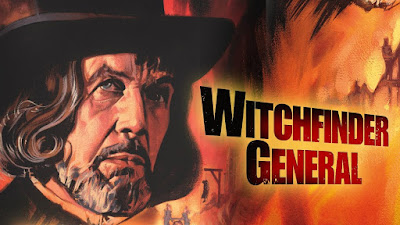 Yes, despite Vincent Price’s detached portrayal of a completely morally bankrupt man, Witchfinder General is neither that witchy or even very generally dramatic. I have no idea how the film still qualifies for an 18 certificate, either. The story itself, in terms of what is happening, is I suppose scary but the presentation on screen is not- if that makes sense. It’s far too old to really hold much power past Price’s performance. Having said that, even Price’s accent wanders a little(finger)* bit, and while Matthew Hopkins is an arsehole, he’s a predictable arsehole which none of the other characters seem to clock at all at any point in the film.

“HE’S LYING TO YOU, AND NOT EVEN VERY CONVINCINGLY, YOU SPANNER.”

Just to almost completely contradict myself, being a big grown up film reviewer I asked my father about Witchfinder General. Daddy assures me that in his opinion it wasn’t scary even fifty odd years ago. So there we are; conclusive, absolute, subjective, fact.

Worst of all, Witchfinder General is simply badly made; poorly lit in places, shadows landing unnaturally from artificial light sources and I’m not sure if it’s the age of the print or the edition on the DVD but much of the film felt like someone disassembled the original copy, then tried to reassemble it some years later. While drunk. The edit is really weird, the colour grading completely changes at random points. It’s probably because it’s an old print that hasn’t been remastered, but it’s off-putting. It hasn’t been mastered, let alone re-mastered.

I took a bit of flak for saying I didn’t like Tony Hancock’s The Rebel, but ultimately things age and the next generation are inured to a style or story because of that sometimes. Face it old man, there is little reason to watch Witchfinder General aside from to see how much film-making has changed**.

I can’t reward a film for what it was to other people, only what it is to me now. Witchfinder General is nothing to me, basically. Nothing, except for the source of one of the greatest cinematic put-downs of all time.

During one of their many on-set fallings out, Vincent Price said to the director, "I've made 87 films. What have you done?"

**A rumoured remake directed by John Hillcoat I’d be very keen to see. Witchfinder General definitely has a story which could use an update and I like Hillcoat a lot.

I'ma go Medieval on yo ass! With these reviews...

THE FOUNTAIN (more of a reach-around, but still reaching)