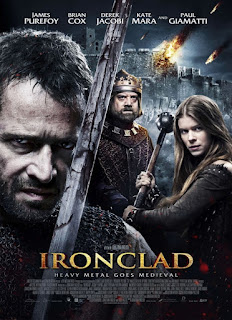 Premise: A demented King John, annoyed by having his hand forced into signing the Magna Carta, lays siege to Rochester castle. It is a “true” story, told as an action film.

Delivery: I first saw Ironclad in 2011, when it came out on DVD. I had fond memories of the action and scored it an 8/10 on IMDb, but the sequel, Ironclad: Battle for Blood, I saw recently and that is every shade of shit. With my desire for some medieval action lately, I had been on the lookout for the first instalment, confident that my claret tinted glasses would see me sailing through in a violent euphoria, as limbs were hacked and heads imploded under the weight of maces.

Ironclad is ambitious, you have to give it that, made for a modest £25m or so, it aspires to match much bigger films for scope and scale, and in places, it does this very well. Director Jonathan English (ha! Johnny English) assembles a good cast and helms a very much “balls out”, blokey romp. English also directed the early Tom Hardy starring film, Minotaur, which I haven't seen but it looks mad as a badger on stilts, so I would like to, despite the 3.6/10 IMDb score.

Starring in Ironclad is Paul Giamatti as King John, which is a mad casting decision. As much as I like him. His spittle spraying desspot is as unhinged and unbelievable as Robert Carlyle's Hitler (seriously, wee Rab played Adolf). Having said that, there is a funny moment of 13th Century redaction which added some much needed humour into proceedings. Also involved in the blood orgy are Brian Cox, who feels a bit ubiquitous for medieval films now, Jason Flemyng, James Purefoy, Makenzie Crook, Derek Jacobi, Charles Dance and Kate Mara- who is given not much to do bar be a woman. Despite the quality of the cast, strong scenes of dialogue is not where Ironclad has its strengths.

Blood, gore and action are Ironclad's aims. In places this is rather fun and unique. However, either it hasn't aged well, or I was so excited to see a man's dismembered arm used as a weapon that I overlooked the poor CGI and shaky cam battles seven years ago. I can't help but think Blu Ray will not aid its cause; despite being annoyed to have to settle for DVD at first, by the end I was pleased the image wasn't crystal clear. There is a commendable reliance on practical effects, which help Ironclad's authenticity but overall it did not live up to my warm memories.

Bedsit it? It's not terrible, but Ironclad has not aged well. The action is occasionally stilted, often gory but in a not entirely convincing way. If it sounds like your kind of film, you'll probably sit through it happily enough though. Even if you love it, avoid the sequel like the plague. 6/10