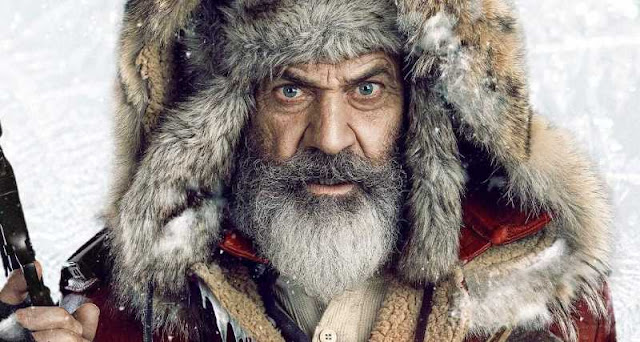 Rented from For Your Eyes Only, Forest Hill

SUPPORT YOUR LOCAL BUSINESSES THIS CHRISTMAS

It’s all Ok though because his Santa is married to a black lady and called Chris not Santa or NIck or anything so Coca-Cola can't sue. Fair warning, this awesome casting means Mel's slate won't be the only thing wiped clean. I’d love to have been a fly on the wall for those contract negotiations, though.

When I heard about Fatman, I’m not ashamed to admit that it wasn’t Christmas which came early- I did warn you. Gibbo, ammo, Walter Goggins, Crimbo, and Chuckles. Chuckles is my pet hamster not a byword for laughter (which I also hoped for), and to be fair he’s always at the movies with me. Always, except for when I’m testing homemade shampoo on him or my taxidermy skills on his offspring, that is. He cries a lot, does Chuckles, but I’m working on the PH levels which should sort that. His fur looks so good now, I can’t wait to mount it.

I’m joking, obviously, I don’t have a hamster called Chuckles. Anymore. I do have a very small, soft rug though.

Fatman writers and directors Eshom and Ian Nelms also made Small Town Crime, a film which made me pay attention. While it isn’t not rock your world good, I liked their schtick and it said “keep an eye” to me. Much like Small Town Crime, Fatman has a sense of humour, which it had to really. Chris’s business is under pressure from corporate types ruining his wholesome, seasonal moneymaking. Apparently Christmas is big business and being a small business Santa Chris can’t keep up. 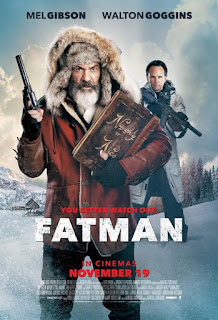 The unsubtle subtext is secondary to a seek and destroy story, where a spoiled little proto-Tory gets his knickers in a twist and goes at Chris in what I can only describe as an overreaction to disappointment. Rather than not getting presents, in England the Tories literally tried to take food out of poorer children’s mouths over Christmas so fuck the Tories, and while I’m at it fuck Trump and Farage- that awful dangleberry clinging to the anus hair of more capably hateful cunts than him. All hail Marcus Rashford.

With a wonderful premise and entertaining performance from Gibson, Fatman has its moments, but they dwindle. Badass Santa with funny fails to capitalise on its concept. Sadly it lacks enough humour, though there is some, or decent action (what is there is perfunctory and not exciting) and left me wondering what it is I was supposed to be enjoying.

Mel Gibson is great, though, his performance is probably the best thing in the film. More, it made me want to see an edgy, aggressive Christmas comedy with Mel as a grumpy but good-natured Santa Claus, as cynical and funny a Saint Nic as South Park might have made a film about. Oh the thought of a Trey Parker and Matt Stone Santa film with Mel Gibson has just made next Christmas come early too. Hold on...

Gonna have to soak Chuckles for a bit after that. Another off-white Christmas for the ex-hamster.

It lost my attention, but making the end of Fatman was essentially just so I could write this review. The film is definitely a victim of me wanting more from it than I got, much like many Christmases, ironically.

Fatman has a lot of promise and isn’t without some great ideas but just doesn’t have the edge needed to truly be a gift. Eshom and Ian have something about their style that I think will click one day, but Fatman is not that Noël, sadly. 4/10

Christmas? Oh go on then, read these...

BRINGING OUT THE DEAD