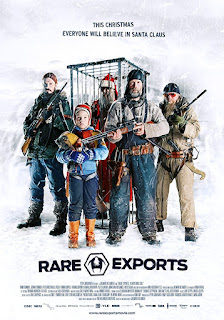 Tagline: IMDb lists seven. Seven! Rare Exports promotional team spunking yuletide taglines all over the place like a wanky snowglobe. That's not gritting the roads, you'll slip in that. All seven taglines are shit, too. Toe headed simpletons each and every wasted seed.

Premise: Santa is real, and burred in a hill, some peopl,e discover him. Rare Exports is possibly one of those films one stumbles across. I'm pretty sure it isn't well known in the UK and to an extent I understand why.

Execution: I'm an old softy at heart, it turns out. Unbeknownst, even recently, to myself, I really rather like Christmas. Spending time with family, eating lavishly, laughing and so on. It's great. I just think it should be contained to one week of the year, so that I can be a miserable wretch the rest of the time and hate on stuff. Bright, for example. I'm not sure there's a good time to hit the world with a steaming pile of fantastical excrement like that, but one magical holiday is as good as the other I suppose.

Christmas is about fun, family, fantasy and magic. And food. And anything it has come to mean to you. Life is what you decide. But for me it is a time of year when we forget the muchado and spend time with our loved ones. However, even my deist friends will admit we all know there's a big whopping lie we tell to make those in need of love feel safe. I'm talking about Santa, you monster. Santa. God what did you think I was discrediting? While I'm atheist I have worked really hard to stop shitting on people's sincerely held beliefs, so long as they aren't borne of hate.

Rare Exports presents as a horror, but it is not. There is a dark grounding, no doubt, which as it makes clear is the real story of Saint Nick. The film has no shame in crossing boundaries, but it has a good essence; like Gremlins. This is really a family tale, with a truly unique premise, with an emphasis on love. Even I can like that.


Bedsit it? Rare Exports is everything one might expect from a Christmas film, without being all one may want. A bit like presents. Dark, but ultimately warm hearted and magical, which Christmas should be. 8/10
Labels: Action Adventure Bedsit Bedsit Cinema Christmas Festive Film Film review Rare Exports Subtitled