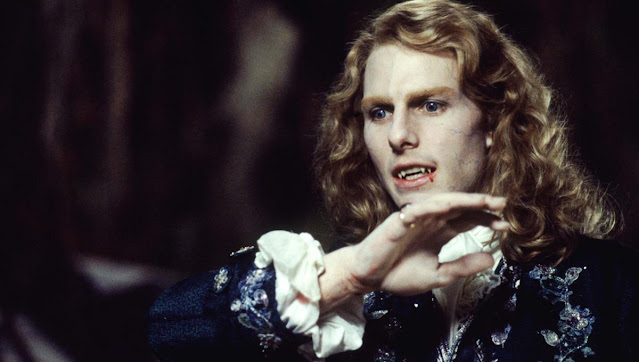 Before we start, in case there are any pedants, I’m aware the film’s full title is Interview with the Vampire: The Vampire Chronicles. It’s shit though, isn’t it.

I first saw Interview with the Vampire when I was about eleven years old. Got to love a lazy babysitter (see also: Return to Oz). My overriding memories from that illicit viewing are how good the practical effects are, how much I loved the gore and that a pretty lady exposed her pubic hair. In the film, not the babysitter. That’s a confusing* evening for an eleven year old; but at least it didn’t have any lasting psychological effects on me.

A couple of years later, as a manly thirteen year old doing a school project on churches or some such thing, I discovered that scenes of Interview with the Vampire were filmed in Lewisham. If you’re from Lewisham that’s pretty cool. I managed to restrain from asking the priest if the scene filmed at his church was the one with the pretty lady’s grown-up-hairs because I’m a restrained and responsible interviewer. And also because I could see the framed image of her from the film on his desk so I guessed it must have been.**

It’s a horror film for the romantic lush, Interview with the Vampire. Tom Cruise “turns” Brad Pitt and the two swagger through time together, mostly at night. Mostly. There’s a bayou beauty to the film, elegance, romance and of course, wonderful, wonderful gore. I’m a big fan of director Neil Jordan and of actor Stephen Rea, which is good as they’re basically joined at the hip, and Jordan’s ease with the epic really helps the film's approach to a subject which could have made for a cheese-fest. 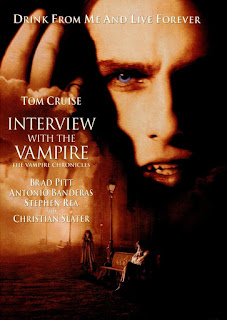 Interview with the Vampire is based on Anne Rice’s book which has many sequels and I haven’t read any of them so this is all useless information. I’d love a sequel to Interview with a Vampire though, filmed entirely in Lewisham. I digress. The movie is a malevolent melodrama, a gory love story to the existential angst of the everlasting and certainly glamourises the idea of a Dracula decadence. Nobody watches Interview with the Vampire and doesn’t want to be a vampire; it’s essentially a recruitment video with more post-mortem virgins than Daesh can offer.

When I briefly attended lectures in my abandoned film degree, I learned that the vampire bite is symbolic of male penetration. The only time in real life I can see the neck getting penetrated is an honest drunken miss, but I guess I get where that comes from. Brad Pitt and Tom Cruise do a lot of symbolic penetration but they don’t seem to enjoy much else except for killing and drinking blood. I’m starting to change my mind on the recruitment, it’s a boring diet with no wiggle room for culinary creativity and if you can’t enjoy sex and booze… well let’s just say symbolism ain’t gonna sell me the lifestyle.

Although it is violent and about vampires, I’d hesitate to call Interview with the Vampire a horror in the true sense. It doesn’t set out to scare. Rather, the film is an appropriately timeless epic which swishes and sways and entertains, the characters are easy to attach to and empathise with. I’ve been going back to Interview with the Vampire time and time again and always enjoy it, even though I’ve now seen an actual, live, (consenting) naked lady.

Clearly my disturbed little mind has a certain adherence to Interview with the Vampire, but I do believe it is an excellent horror film for people who aren’t really into horror- and those that are. It is beautiful, bloody and even for a vampire film incredibly sexualised. 9/10
* But not regretful.
** Obviously this isn’t true, I did ask and he said no and gave me 30 Hail Marys.