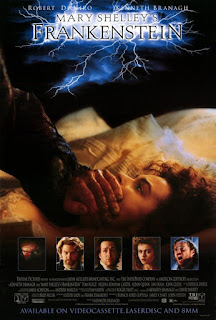 Tagline: “Be warned. It's alive” So what? So is Yakult.

Premise: Based purely on your ability to find and read this blog I'm going to assume you know the story of Dr. Frankenstein and his rather selfish quest to rid the world of death.

Delivery: The film is pushing 25 years old now, and while Mary Shelley'sFrankenstein has dated a little, it is still brilliant cinema. For those of you living in a cave (apparently a cave with internet access) the story follows Kenneth Branagh's Victor Frankenstein as he, disturbed by the death of loved ones, attempts to reanimate a corpse. He is successful, it is no spoiler to say, but the, “monster” he creates suffers from some unsurprising existential angst and is simultaneously the cause of fear and hatred. Victor then fails to learn from creating one monster which hates him, and as it goes about its revenge, makes similar mistakes again.

Branagh's Frankenstein is a brutal beast, uncompromisingly effective in displaying the fear and hatred of mortality we all are forced to face from time to time. In that sense, it's a hard watch. We've all loved, we've all lost. Arguably what Mary Shelley's Frankenstein does best, is make the point that sadly, death is necessary. The living don't really want the dead back, it's a reality which comes with all sorts of unforeseen problems. Also, and here's the real kicker, the dead don't always want to be brought back. I mentioned it recently in my review of A Girl Walks Home Alone At Night, but the John Ajvide Lindqvist novel Handling the Undead, is a brilliant twist on the same premise; what if the dead came back. Read it, you bum.

Death allows the world to continue. Yes, it is at times unkind and random, but if we all stopped dying, we'd suffocate this globe in a month or two. As Victor struggles to grasp this, ensconced in a kind of hard wired maniacal God-complex, he's oblivious to the pain he's wreaking on his creation (played by Robert DeNiro), and those near to him (a cavalcade of top acting talent), as well as the terrified pitchfork wielding village yokels (didn't recognise any of the actors, but they're all perfectly portrayed plebeians). It's a tragedy, but in much the same way as any Thomas Hardy novel, a tragedy born directly of the protagonist's inability to stop making poor decisions.

Frankenstein is both a brilliant, painful drama and, weirdly, incredibly rewatchable. An entertaining essay on death. Who'd have thought that much lauded Shakespearean actor/ director Ken Branagh would end up helming Jack Ryan sequels? Mind you I haven't watched that film, maybe it's really good, but I doubt it's as good as Mary Shelley's Frankenstein.

Bedsit it? Although a classic tale, this is for me, the definitive take on the Frankenstein story. It's not on Netflix but well worth the expense on Blu Ray. 9/10