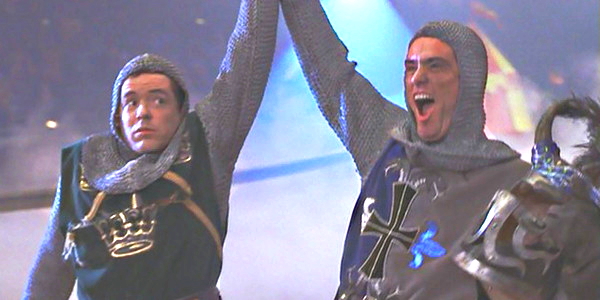 The idea of a movie which has both Jim Carey and Ben Stiller in is something my stepdad would happily self immolate rather than watch. For him, the screams of pain shrieking from his soul as he slips into unconsciousness would be far more horrific than merely burning to death. Fortunately he didn’t have to endure The Cable Guy, but I did watch it on his Amazon account and rewind enough so that he’ll constantly be reminded that he hasn’t finished it yet.

The Cable Guy is now so old that much of the cast have gone from being bit parts in it to the heights of a genuine star and then crashing back to relative obscurity. Or worse; they are still and have always been Andy Dick. It’s fun playing the “guess the age now” game watching The Cable Guy. But then I like that game. You may not; much like The Cable Guy

Am I right in thinking Matthew Broderick killed someone? Not in a bad, murdery way, just in a careless way, like accidentally serving sesame or salmon mousse.

I checked, and I was kind of right, except that it was in a bad way given he was found responsible after he killed two people in a car crash. I’m sure the $175 fine really hurt the Hollywood actor more than the families of the dead, though.

Disregarding real life, which we have to do or we’d never watch a film again, Broderick’s character Steven is a sap, a weeping, recently broken up with blood clot. He’s as pliable as putty, Daesh could turn up and he’d bend over and have their babies. I didn’t like the character, I think is clear. Has he ever played a part I like? I don’t think so. I have decided I don’t like Matt Broderick. It’s a horrible advert for the film, Steven as the lead character. Only he isn’t the lead character, really.

Steven is the charmless, pitiless prick whose cable guy (Jim Carey) turns up and both improves and ruins his life, with Steven incapable of ever exerting anything more powerful than a fart. That’s the story, and there’s one reason for watching.

The Cable Guy is the Jim Carey show, his physical talent on full display, and he shows an underlying menace that his later career has very much benefited from. Unless you’re my stepdad and think he’s only ever played one part. Though if Carey is your Kryptonite you’ve stopped reading already and it’s safe for me to tell you you’re wrong. 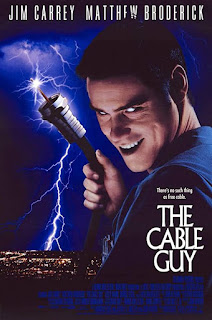 Only ever named as “The Cable Guy”, Carey’s performance makes the film. Watchable. Makes the film watchable. His weird character leads Steven astray and yet somehow you always know where the story is going. Or do you? At one point Steven and the cable guy go to a restaurant. A restaurant special to The Cable Guy.

There are laughs for sure, and the odd tone of The Cable Guy certainly makes it a bit different, but it sticks in the mind mainly for being so off kilter. Broderick is his normal wallflower, Stiller underused though funny and Carey kills it. Your enjoyment hinges on this. Better go, I have to put my stepdad out.

I was modestly entertained; The Cable Guy is Jim Carey mixing madness and menace perfectly, but that’s the best thing about the film. He provides the fun. Still worth watching if you like Carey in his pomp, not as bad as fire. 5/10

There are many other weird comedies, but these are the ones I've reviewed...
VICE
ABOUT TIME
BORDER
TABLE 19
LAND OF THE LOST
Labels: Adam Thorn Amazon Prime Ben Stiller Comedy Film review Jim Carey Mathew Broderick The Cable Guy Thriller