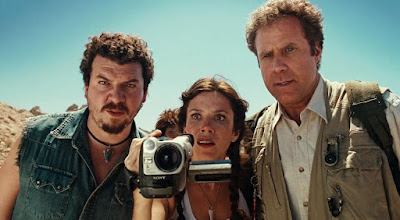 Perhaps one of Will Ferrell's lesser known, or possibly most forgotten films, Land of the Lost was made during big Will's heady purple patch. That being 2003's Anchorman – 2012 depending on how much you liked The Campaign. Anchorman was a career high, an all-time comedy great, and much of his output since has either slowly declined or bombed, but it was all slipping from a great height.

Utter nonsense, but absolutely great fun. There's lots of throwback sci-fi costumes and effects, which are entertainingly mixed with modern CGI and practical effects, Land of the Lost definitely has something to please sci-fi fans. However, it's the comedy which carries it, and gives it a broader appeal.Die hard fans of the series may lament the update, but seriously how many of them are there? I've not seen the series and given that this version is so funny, honestly couldn't care if it was pissing on the original show's grave. 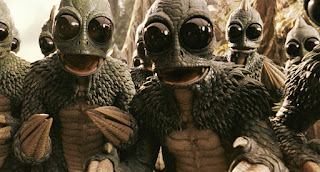 As one gets older, the concept of adventure becomes ever more a fiction, or simply less enticing. Land of the Lost made me want to be a part of the gang's escapades, bringing out a joy and connection I hadn't felt with a film for a little while. It was rather nice.

Friday night, bowl of popcorn (or chilli in my house), perfect fill-yer-boots chuckles. No brain tax.

The Cinematic Sommelier: If you don't know Will Ferrell's work then try that, but honestly if you don't I'm amazed your online reading film blogs. I really enjoy comedy Sci-Fi series The Orville. Mars Attacks has the same oddball energy and for the Netflixers, I refer you back to the Will Ferrell back catalogue advice.