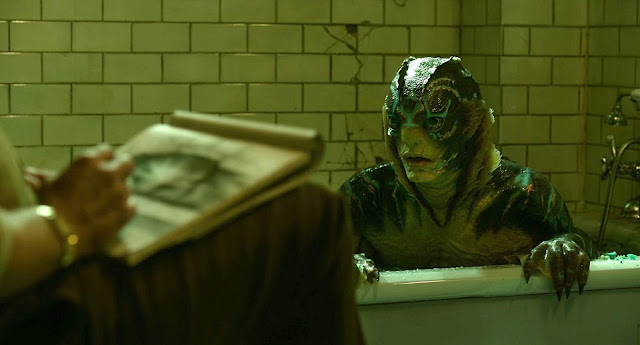 When I first watched The Shape of Water shortly after it came out, I hated it. I had been incredibly excited beforehand as I love Guillermo del Toro. The Devil’s Backbone, Crimson Peak and especially Pan’s Labyrinth are all films I adore, surely this oddball effort would join them. It was incredibly upsetting that I didn’t bond with The Shape of Water at all, turned it off and rated it 2/10 on IMDb in what I can only describe as a strop.

Noticing the DVD in the local rental place got me thinking about the film again. I was on the verge of a depressive episode that put me in hospital for a month when I first saw it, and I have discovered in the past that when my mood is bad and I watch a film I occasionally blame the film for being shit rather than me for being a shit. Based on this and now that I'm all growed up, I decided to give The Shape of Water a second chance. I’m so charitable.

The Shape of Water is about Elisa, a mute woman (Sally Hawkins), who works at a secret government facility and falls in love with an amphibious fish-man (del Toro regular Doug Jones) being held captive there. Yeah. I know. Pan’s Labyrinth is about a twelve year old given tasks by a magical goat-man though so it’s hard to scoff at the premise if you enjoy del Toro’s films. 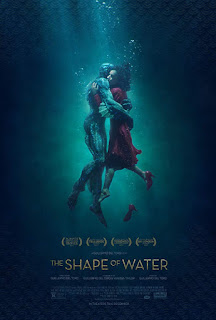 Oddly, my first thought (beyond wondering why I didn’t recall seeing Hawkins naked the first time around) was that The Shape of Water feels like a Jean-Pierre Jeunet film. Given that like del Toro, Jeunet is known for intricately designed, offbeat films that’s no surprise. Then there was the love story, which on every level is fucking strange. Yes cinema has bestiality history but as the BBC has taught us, not all historical sex is good sex.

Beauty and the Beast, The Little Mermaid (both Disney the pervert), King Kong (think about it), Sleeping Dogs Lie; all of these feature creatures with a sexy spin. If you haven’t seen Sleeping Dogs Lie, put it on when your grandparents are over. With your dog on your lap. It's a perfect family film. None of the aforementioned movies are as quite overtly romantic as The Shape of Water, though, and this is something I for one found challenging. There was a reason for that, because I spent a lot of time thinking...

I know it’s weird, but I kinda want to see the fish creature’s willy. Only for funnies, like seeing Mickey Mouse with a stonk-on. We see Sally in the buff, it’s only fair he whacks it out too, you bloody sexist filmmakers. I’d make a joke about the Amphibian Man’s one smelling worse than mine but you get used to your own scent, don’t you.

Back to the story. Michael Shannon, type-cast, but type-cast in a role he’s excellent at as a sexually repressed, uptight government agent, hunts Elisa and her lover as they hump like sea rabbits and try to reach dry land wet water. The Shape of Water is definitely one for fans of this type of oddity, it was never going to be the proverbial gateway drug. Like The Fortean Times, if you get it, you get it.

I emphatically do get the fantasy element and stylish distraction from disbelief, but where Free Willy The Shape of Water loses marks is that it is too straightforward a story, relying on its bizarre bells and whistles for originality; which is fair enough, but not enough. I was definitely wrong about the film, it is far better than I thought and proof that mood can override opinion, something I will no doubt investigate further.

The Shape of Water is worthy of much more than two out of ten, I was wrong.

Given its style, something of an Amphibious Amelie, and while nowhere near as bad as my mood had made it some years ago The Shape of Water is certainly not as good as any of the three del Toro movies I mentioned earlier. Excruciatingly well made, exceptionally acted and great to look at, it suffers from predictability (and a lack of fish dick) which knocks it down from a very good film to a good one. 7/10