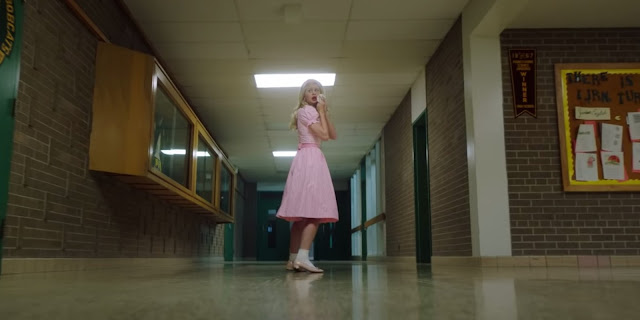 Scary Stories to Tell in the Dark (2019)
Spoiler Free
Horror/ Thriller
Rated 15
Available now for home viewing
Let me start by saying that this is categorically not an anthology film, such as V/H/S or Southbound, where the stories exist separately, in and of themselves. Everything in Scary Stories to Tell in the Dark is part of the same narrative- and it really works.
Directed by André Øvredal, the man behind the brilliant Troll Hunter*, Scary Stories to Tell in the Dark stars nobody I’d really heard of, except for Dean Norris as one teen's father, but that’s really not important and they’re all pretty good. I had reasonably high hopes going in, but at the same time wasn’t sure what to expect; as giddy with excitement and anticipation of the unknown as a man my age can reasonably get.
Teenagers join up with a drifter (of roughly the same age so it isn’t as creepy as it sounds) and piss around in a scary house on Halloween 1968. The conveniently gothic gaff is rumoured to have been home to a woman, locked away, who told scary stories through the walls to the local kids which ended up killing them. Wouldn’t you know it, the rumours were true… and the stories are back! 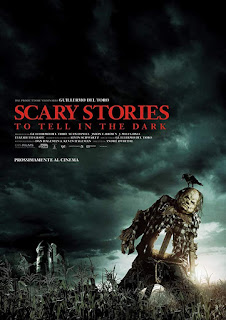 At the centre of the film is, unsurprisingly, the power of stories on us- specifically here our fears. Something like Final Destination meets Crimson Peak, with monsters thrown in, Scary Stories to Tell in the Dark is a mish-mash of differing dread brought to life. With some lovely flourishes and effects work, the film is scary but not all out scary. There’s a good element of fun as the tale ticks along at a nice pace. Boasting some lovely twists on what you might expect, the premise allows for a lot of creativity and with Øvredal's ability the opportunity is seized.
Scary Stories to Tell in the Dark is what I’d call a crowd pleasing horror, with nothing too offensive (by which I mean all out terror like a Rob Zombie film) and a nice mix of creative ideas. Yes it is mildly derivative, but that could basically be said of every film to varying extents and Guillermo del Toro’s influence is woven clearly into its DNA so it was always gonna be in that way. Well designed myths and legends, especially the presence of ghosts and ghouls, echo his other work in a good way.
Scary Stories to Tell in the Dark is a lot of fun, and I suggest going in naïve like I did- too much is exposed in the publicity material in my opinion.
Bedsit it?
Some nice effects, nasty moments and a very interesting premise which ends with a potential sequel teased. A second film is not something I would be against, Scary Stories to Tell in the Dark very much entertained me. Strong 7/10