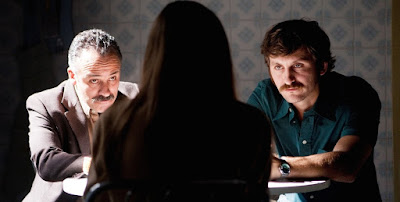 This murder-mystery from Spain was a hard one to track down: only recently readily available on DVD, but now also on sale via Amazon on demand. Marshland garnered good reviews on release five years ago, and I was pleased to finally be able to see it.

Opening with stunning aerial shots of the marshes where the story is set, two detectives-new to the rural area, meet for the first time. Gregarious, hard drinking and potentially unhinged Juan (Javier Gutiérrez) and stony faced, straight laced Pedro (Raúl Arévalo) are uncomfortable bedfellows. Sent to the region with a task, the men are instantly ill-at-ease with one another and their new environment. Their job is to find two missing teenage girls.

The girls show up, sadly mutilated and abused. Solving the mystery of how this happened provides Juan and Pedro with a tin of worms to open, but no tin opener. In this small fishing town in southern Spain, 1980, everybody has a secret, from teenagers at the local school to the investigators themselves.

Setting Marshland in 1980 adds to the story, this is pre DNA (not mainstream until the late eighties/ early nineties). Old fashioned techniques, of varying effectiveness and acceptability, are employed. The country sits uneasy in the wake of Franco, despite his being dead for five years. This national conflict frames the story. Left is emerging over right but the detectives, symbolic of this struggle, find themselves in no man's land; an amoral void where a serial killer lurks.

Juan and Pedro are two men with two very different approaches and world views, but the same goal.

The marshes, beautiful and revelatory from the air, are confusing and mysterious on terra firma. They conceal rather than reveal. Director Alberto Rodriguez fuses this duality skilfully. The cinematography in Marshland is top notch, really aiding the story, which moves with the same speed and occasional frustration as the investigation it concerns. A deliberately contemplative, metronomic pace, which slowly but surely drags you in as it ticks ever faster.

Well acted, though as always with a subtitled film there is something of a layer between me and making that call definitively, Marshland reels you in. Narratively it is typically European, leaving the detective work to the viewer. Rather than selling clues cheaply they are carefully weaved into the film's fabric. Not everything is a hint, just as not everything is a red herring. Marshland feels no need to conform, and I personally love that kind of film making.

Marshland's macabre secrets are a lit fuse which you can't help but watch as it burns slowly, creeping toward the explosives tantalisingly out of sight. Yes it has a pedestrian pace, but captivatingly so, and it does increase to a sprint as more girls' lives are threatened. Tick tock.

The Cinematic Sommelier: Obvious picks here are similar non- English language investigation thrillers, all of these are brilliant: The Secret in their Eyes, The Girl with the Dragon Tattoo, Tell No One. For the no-subtitles philistines, or Netflix aficionados, try Mystic River or Wind River.

Bedsit it? Track it down. Amazon, Fopp, wherever. Do not expect an action filled thrill ride, Marshland is far too nonchalant, confident in its own skin for any of that. This is quality European cinema. 8/10

Hidden Gems are what Bedsit Cinema lives for- have a look at these...