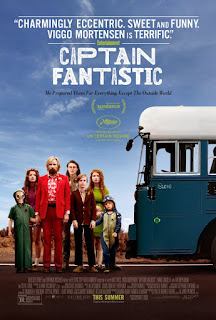 Tagline: “He Prepared Them For Everything Except The Outside World” I'm not going to hate on this one, it's a good effort.

Premise: A man who moved off grid with his wife to raise their children, who presumably were all or mostly all born while they lived in such a manner, has to introduce the children to the larger world after the mother dies. It would be an understatement to say the children struggle to fit in and the father is not the most popular man with his deceased wife's family.

Execution: When I was twelve or so, a lad a few years above me at school died of meningitis. As I was in the choir, we were asked to sing at his funeral in the school chapel. Some of my choir friends knew the boy, it was an understandably sombre and upsetting occasion. When the coffin was carried out at the end, his family played his favourite songs, one of which was the Coolio song Gangster's Paradise. He had good taste, this boy, it was also somewhat out of place, and darkly funny all these middle class white people listening to a rap song in church. I have not been able to hear the song since without remembering that afternoon. After this film, you may feel the same about a Guns n Roses tune.

Captain Fantastic's trailer does a very good job of capturing quite how well rounded the film actually is. Emotionally speaking it's got a bit of everything but particularly what is heart warming is the joie de vivre it captures. That even in times of profound sadness and discord we can find humour and beauty. Told through the eyes of six children drinking in society for the first time and their cynical but loving father, while they confront the death of their mother, the viewer really gets sucked into caring for the renegade troupe.

Director Matt Ross is an actor by trade, and that might explain how he got such natural, effortless (looking) performances from the cast. Viggo Mortensen is excellent as ever, seriously, the man has one of the best CVs around: The Prophecy, The Lord of the Rings trilogy, A History of Violence, Eastern Promises, The Road... Of course it depends on your taste but he's a favourite of mine. The children are all good, particularly George MacKay and Shree Crooks, and Frank Langella is in dominant form as the maternal grandfather.

The comedy in the film largely comes from the clash of cultures between the children and what we would call the “real world”, but also from the brutal honesty of Mortensen's Ben, with his children. Captain Fantastic has the intelligence to raise questions about parenting, growing up, family and beliefs, but let you decide what to think, it doesn't fall on one side of the fence particularly.

Above all, it is a sweet, moving and funny film about family, which isn't taxing like, say, Manchester by the Sea is.

Bedsit it? This is a beautiful little film which should have received more media attention than it did. I highly recommend it. You'll never listen to Sweet Child of Mine again in the same way. 8/10 (at least)
Labels: Bedsit Bedsit Cinema Cinema Comedy Drama Family Langella Mortensen Movie Rated Review Sweet Child of Mine