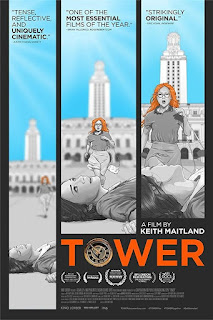 Tagline: None listed, which I have to say is a blessed relief given the subject matter.

Premise: A dramatic and inventive documentary recreating the day Charles Whitman killed over a dozen people from the tower at Texas university in August 1966.

Execution: I'm not going to bother with a build up, pre ambling this would be a waste of time. I'll come right out and say that Tower is an absolutely brilliant documentary and piece of creativity. It is art. Pure and simple. Director Keith Maitland is one to watch, the way his documentary takes the normal interview format, and recreates the day so many people lost their lives is both engrossing, visually stunning and powerfully emotional.

What's so painful about Tower, is that it's also so prescient. Charles Whitman's murderous spree was over fifty years ago, but this could be about any of today's mass shootings in America. Virginia Tech, Sandy Hook, Las Vegas; all of these atrocities echo in the testimonies of those in Tower, describing the horror in Texas all those decades ago.

Bedsit it? In case I wasn't clear enough, this film is not only engaging, I won't say entertaining as that word seems wrong- voyeuristic almost in this context, but important too. I've never seen anything like it, and I watch a lot of films. 9/10
Labels: Adam Thorn Animated Bedsit Cinema Charles Whitman Cinema Documentary Film Rated Review Shooting Texas Tower Whitman