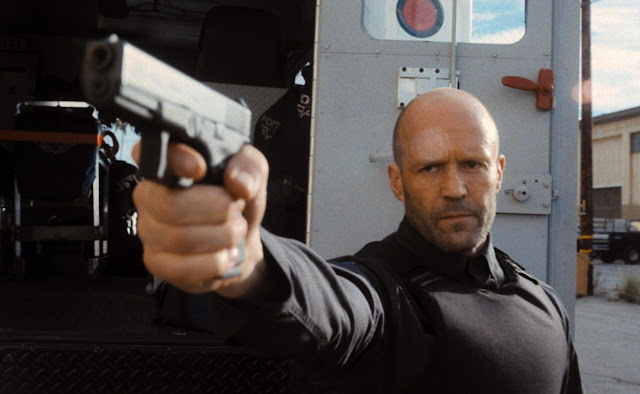 Action/ Crime/ Thriller
Rated 15
Amazon Prime
Spoiler Free
I asked, you answered. I then realised oh shit I’d rather not do that, what on earth did I do that for? A little while ago I ran a poll on what film people would like to see reviewed from the notes I have scrawled in my pad in the dark, like a hateful little cinema mole, but hadn’t turned into a proper review on the Bedsit Cinema site yet.

The winner, by a 100% landslide, was Guy Ritchie’s, Jason Statham starring, Wrath of Man. Congratulations to the person who voted for that. My mum doesn’t have Twitter so I know it wasn’t her. Wrath of Man it is- a film I have almost four pages of scribbles on but had sat unattended to in my pad. Why hadn’t I reviewed it you ask? From what I can interpret, it’s because I wasn't in a good place and didn’t have a fucking clue where to finish. This could be fun.

Stylistically a clash between a heist caper and a western, I warmed to Wrath of Man pretty quickly. Ritchie is good at visual whizzbangs and punchy dialogue (in a witty way, not a slurred, bran-scrambly, boxing way). It reminded me a bit of that Arnie one, Sabotage, which wasn’t awful. But then, oh no, cardigan alert. Why are cardies such a popular cinematic indicator of a hard nut with a soft heart? They look crap, especially on muscle men.

There’s an argument that some of the tough-guy ensemble cast are underrated, there’s also an argument that they’re just average and that's why they aren't leading men. I certainly have a lot of time for The Stath, who reps Lewisham in this film as well as real life. Respec’. Eddie Marsan is an absolute gem, whose part in Wrath of Man feels almost completely pointless. I can’t be arsed to talk about the others or in fact the film because my notes trail off here into a rant about work.

I may not have been paying attention when this happened.
When you’re struggling with work, it makes life worse. I'd done everything possible in my own life to correct the damage work was doing to me. It became a case of "it's not me, it is you". I very much did not want it to be that way. Even in a good place, I couldn't displace work and apparently my Wrath of Man viewing was somewhere in that nadir. Who wants to read a Guy Ritchie review from a depressed idiot. Oh, right. You voted for this.
In my film reviews, I can't tell you what to enjoy, just how I felt and what I did. With my job I faffed about, felt sorry for myself and moved on. It wasn't easy and more than once I wanted to jack it all in, give up on anything approaching a normal life. But it was good for me, getting out of that dark place is not easy and never feels great until you look back and wonder what the fuck you were up to. Saying goodbye, seeing the present become the past when you hate that present; it's physical. It works.

This being the now not the past which is how time works unless you’re David Icke or QAnon or whatever, things have changed. I’ve just got a new job which I’m in love with so far. It took a lot of effort and a little time, and my memory, which is why I took notes when watching Wrath of Man, has faded. It’s why I take notes full stop. That job though, that job was killing me and I don’t know about you but sometimes mentally even a good film isn’t enough of a distraction.

I enjoyed Wrath of Man, it is different enough to The Gentlemen that I didn’t think for "fuck’s sake this is just The Gentlemen again". It is, however, very similar in its large cast and style, even though Guy Ritchie and team switched the genre up slightly. You’ll never be able to watch a film without the world outside it impressing on you, but some will override your mental state. This didn’t mine. I will return. 6/10