The Gentlemen (2019)
Spoiler Free
Rated 18
Action/ Comedy/ Crime
The Gentlemen is very similar to Guy Ritchie’s best work (Lock, Stock and Two Smoking Barrels, Snatch) which is fine because I like his best work. I actually rather enjoyed the Sherlock films he made too, and RocknRolla. The Man from U.N.C.L.E. was fun. Ok apparently I like most Guy Ritchie films and they’re only ruined by Aladdin and King Arthur: Legend of the Sword. King Arthur in particular was so atrocious it was the only other Guy Ritchie film I could think of when writing what is now a very long paragraph about his directorial work.
In The Gentlemen Matthew McConaughey plays an American weed dealer trying to peddle his homegrown on our own rather British turf. Some other guys scrabble around this central plot with various, nefarious and or noble, depending on perspective, schemes of their own. A cast that includes but is not limited to Colin Farrell, Charlie Hunnam, Michelle Dockerty and Eddie Marsan holds undeniable talent but one casting choice was somewhat inspired.
Hugh Grant as a sleazy, dickhead journalist is just wonderful. The last time he was this much of a wanker Devine Brown didn’t get paid. Not until she sold her story anyway- to a hack like Hugh plays in The Gentlemen. Was Devine Brown playing the long (and hard) game? I bet she was. Touché Devine, touché. 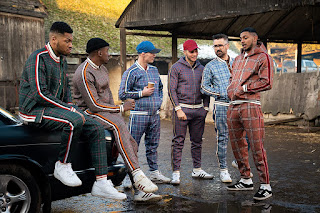 Although Grant is a wonderful cock, in the film- Devine wasn’t available for comment, all of the men in The Gentlemen may as well have their wangs out all of the time to wave at one another instead of actually talking. Now there’s an idea for a silent movie. You may be forgiven for wondering if there’s actually a good guy in The Gentlemen, but I ask you; is there a good guy in Goodfellas?
Rather the opposite of a silent movie, noise is what The Gentlemen is all about. Rascal fast writing, trademark Ritchie electric editing, violence and humour plus my notes read “banging soundtrack! Wu Tang!”. I had forgotten I was drinking when watching The Gentlemen. All do a very good job of disguising how straightforward it really is, which is to its credit.
Bedsit it?
Pure entertainment with no desire to do anything more than keep you interested and enjoying yourself. Which is good, because it doesn’t- The Gentlemen is, for some, perfect Friday night, bubblegum for the brain fun. 7/10 and will probably stay there forever.
Want some all out entertainment? Try these reviews...
ZOMBIELAND: DOUBLE TAP
ANGEL HAS FALLEN
PLUNKETT & MACLEAN
HURRICANE
OVERLORD
Labels: Action Adam Thorn Bedsit Cinema Charlie Hunnam Colin Farrell Comedy Crime Drama Guy Ritchie Hugh Grant Matthew McConaughey Michelle Dockerty Review The Gentlemen