Hold on to your cunts, this one is cunty- and not just the language (I will stop using the word cunt from…. now. Promise). Everything about Rise of the Footsoldier: Origins is crude and crass and I will stop deliberately trying to emulate that. What happens naturally happens naturally.

As far as I am aware I have never seen a Rise of the Footsoldier film. Origins is the fifth, and a prequel to the 2007 film featuring some of the main cast and yes, that is an issue. I spent the first half an hour wondering when they’d join a football firm, but apparently Rise of the Footsoldier isn’t about football thugs, it’s about the far more palatable Essex drugs trade. I definitely haven’t seen any of the other films. I have seen The Football Factory, though, which is shit.

Football Factory director Nick Love is a specialist in films with no likeable characters whatsoever and I can only assume he was busy when the producers of this film called.

My favourite shop in the world, For Your Eyes Only in Forest Hill, a beautiful, defiant, slap in the face to the digital age, had to buy extra copies of Rise of the Footsoldier: Origins, because it was so popular. We are in South London, I suppose, and I certainly am happy for the business it brings them.

I only drink wine. A Millwall fan (and I have nothing against them per se as I have been a regular at The Den, but he was a Millwall fan and I’m not going to water it down because I don’t want to offend them, which I don’t because I ain’t hard) once said I was calling his “bird a dike” because I served HIM a pint that was meant for her, and apparently for women it’s gay to not drink half pints. It isn’t. I’m a straight man and I find a lady who drinks pints attractive. If he’s right, maybe that’s why I’m single, I keep hitting up the wrong demographic.

I only mention it because that guy is an arsehole and probably has a role in this film. 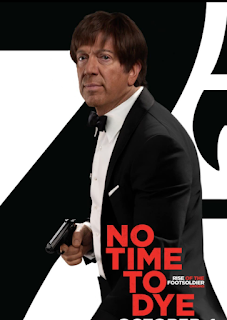 Leading actor Terry Stone barely passes as an actor let alone pretending to be half his actual age. I’m sure he’s a lovely bloke who likes kittens and shandy and gender neutral pronouns in real life. Except for on Grindr, where he’s a macho studded power bottom. Allegedly. Apart from Keith Allen who clearly ran out of beer money, Vinnie Jones is the most vaulted thespian involved in the production. Yep.

There were some notes I scribbled while watching this but they’re entirely irrelevant as I think I only watched Origins the whole way through because I was utterly transfixed, in a perverse way. And not pint drinking women perverse. Anyway, overuse of the poor man’s word for vagina, rather unsatisfactory violence because it is not creative and I wanted them all to be badly hurt, and all of the plot and acting meant I didn’t really rate Rise of the Footsoldier: Origins.

I made it to the end of this film because I write a film review website and sometimes one has to suffer through the things. I was raised Catholic after all. I hated all of the characters and awful attempts to de-age them. I despised the acting and the entire point of the film (which apart from being an origins film doesn’t really have one). I wrote my own scoring rules and therefore pay Rise of the Footsoldier: Origins a huge accolade with a lofty 3/10.

If you’re going to watch it, give your money to For Your Eyes Only because they’re great.