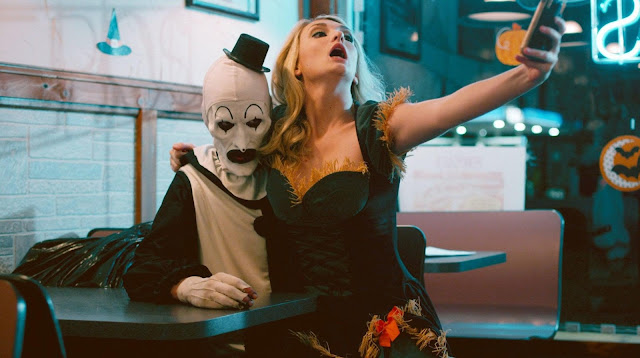 Terrifier came recommended with the promise of gore and within minutes of starting this grimy, grainy shocker was in full, bloody swing. There’s no beating about the bush with Terrifier, it’s a clown and mouse chase of motiveless origins as Art the Clown hunts women in a night time rampage. The film never really bothers to explain why you’re watching its brutality unfold on screen, it’s just presumed that’s why you’re watching. They’d be right, that's entirely why I was watching.

Be careful what you wish for. 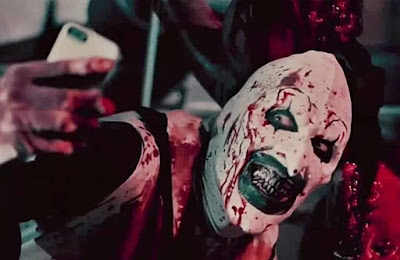 As murder after murder battered itself permanently into my brain, the horror in Terrifier really derived from me just not wanting to be more traumatised than I already was. The film boasts, and I deliberately use the word, some of the most depraved, disturbing gore and violence I’ve ever seen. I felt a bit sick, and like I shouldn’t be watching. Naturally I kept watching, wondering what snuff-viscera writer/ director Damien Leone could brutalise me with next.

Terrifier is utterly devoid of hope, it is traumatic, shocking and debased and I think that’s exactly what it wants to be. A badge of honour. Staggering from one horrific demise to another, If you suffer from coulrophobia, this is not the film for you. If you suffer from many things, this isn’t the film for you. I don’t think many people would truly enjoy Terrifier, it is more of an endurance test. Saying that, the sequel is out soon, so what do I know.

I don’t really know what to do with what I’ve seen. On one hand it I feels like I’ve just witnessed a brutal crime, on the other I quite like that I’ve been shocked and had to tell myself “it’s just a movie”; that almost never happens to me anymore. I’m going to be generous because Terrifier does exactly what it sets out to do- gleefully shock. Yes, I'll watch the sequel. 7/10