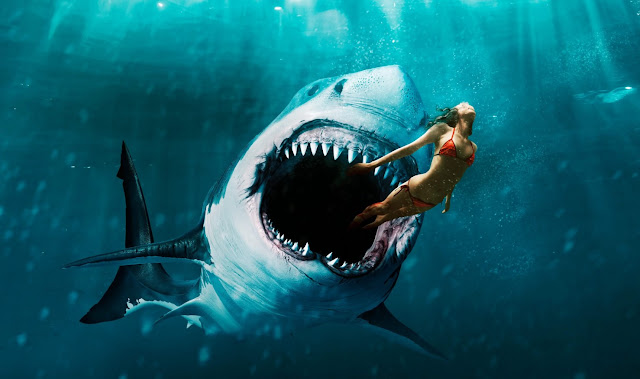 Horror/ Thriller
Rated 15
Spoiler Free
Opening with an underwater shot remarkably similar to the most famous shark film of all, Shark Bait distanced itself from Jaws almost immediately by introducing a cast of annoying characters. They’re supposed to be irritating, to an extent, but there’s a brunette with all the presence of a wet lettuce. Wet before she even goes in the sea.

For a while, as the #SpringBreak-ers splash around adrift at sea being all college-y and vacuous, all I could think was where’s the fucking shark, brah? All of a sudden, there he is! Respectably rendered and believable, too, considering I didn’t expect a lot of Shark Bait. Is sharky a he? Is Jaws a he? Jaws the shark is pretty gender neutral but the model was called Bruce so I suppose he was. Let’s Call Sharky McSharkbait a she though, for funsies. 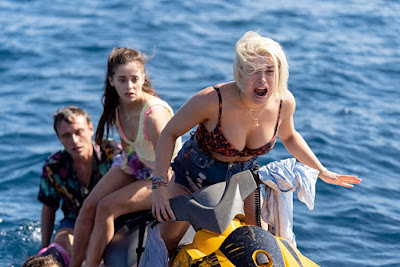 People die. You won't massively care.
Shark Bait is remarkably well shot in places, and the deaths are satisfyingly grimmer and more gory as the plot goes on. Oh, spoiler alert, plenty of the cast get eaten by Mademoiselle McSharkbait. I didn’t really care about any of the characters, except for the shark because sharks are precious, and the fewer humans living the longer the ones still breathing keep breathing. Munch away Sharky.
Bedsit it?

It’s no different to many slasher films in terms of premise, Shark Bait: a crew of attractive but thinly drawn young adults get slowly whittled down by a monster of whatever origins. If you like the creature feature sub-genre there’s munch to enjoy in Shark Bait. All hail Sharky McSharkbait. 6/10