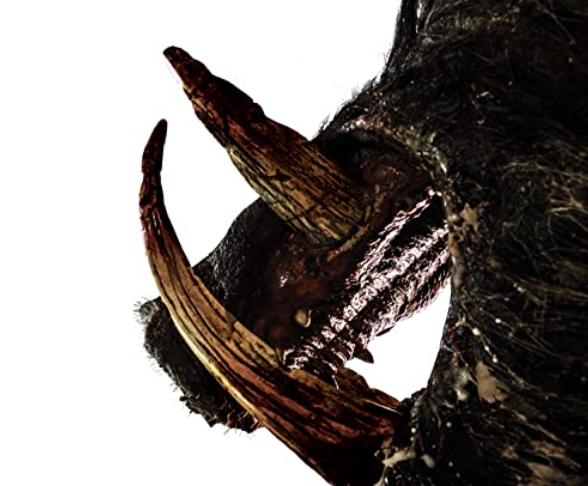 On a lazy Sunday afternoon, making roast lamb, drinking wine and generally feeling a bit miffed that all my plans for the weekend had fallen through, I decided I had nothing to lose by putting Boar on. If it was boaring (got that out the way early) I could turn it off. Boar was a throwaway watch. Nothing ventured, nothing gained.

I’m pretty sure I watched a French horror about a killer boar some years ago… Yup, Prey (2010), but it didn’t meet expectations. I say this seriously, what kind of expectations you have for this type of lesser known creature features essentially defines what you’ll take away after watching. If someone told me Boar (or Prey) was the new Shawshank Redemption, once I’d finished laughing at them I’d watch it anyway with exactly the previous presuppositions- based entirety on its premise.

A giant, man-eating boar roams the Australian outback. A family comes into contact with it and has to survive. I mean, you know what you’re in for immediately, don’t you.

Boar has a very, very respectable cast; my inner horror geek mainly going nuts for Bill Moseley and John Jarratt. Former wrestler Nathan Jones is a main character, and he’s a lot of fun. I suppose WWE is a cross between sport and hammy acting, so it’s good prep for creature-feature horror fare. Meanwhile Jarratt and Roger Ward play two pissed up Aussie old boys and are also great value, and I’m confident between them Boar holds the world record for most uses of the word “mate” ever in cinema. Fact.

There are stock characters aplenty, most of whom you want to die- again par for the course. Annoying teenagers feature prominently, for varying amounts of screen time. 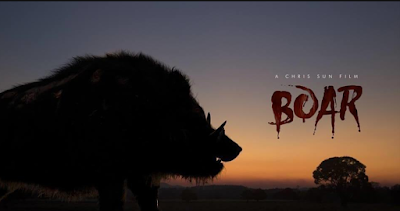 There’s really only one reason anyone puts on a film about a mahoosive killer tusked pig, and that’s gore. Director Chris Sun stated that one of his inspirations for Boar was Jaws and it’s easy to see why as the beast is teased into the film visually. Bodies start piling up and more and more the villainous boar is shown.

When it comes to dinner time, I was surprised at how good the murderous mammal actually was. Yes there’s an element of cheesy, but it’s a ten foot piglet, I wasn’t expecting a David Attenborough documentary. The deaths are satisfyingly splattery and grim. Boar ends in a delicious, warm, metallic, taste of gristle, the preamble to which is entertaining if nothing that’ll make you tell people it’s the new Shawshank Redemption. Gore Goblins will gobble this up.

An easy watch for the horror hound. Does exactly what it says on the tin (there’s a boar, no denying that) and I was entertained. The lamb I was cooking, however, was a fucking let down given my effort. Boar scores 6/10. Lamb 4/10.

Animals are great aren't they. Check out these creature feature reviews!..