While I was excited to see Prey, my expectations were fairly limited; I didn’t really expect much past a sort of Native American, old-timey twist on the Predator series. Dances With Aliens. Plenty of action, excitement and gore with some new ideas would be perfect, yes please. It’s fine to hope for something that’s just not shit, sometimes. Like, I want to win the lottery jackpot, but really I’ll settle for just a million. It’s nice to have modest and reasonable desires.

Prey is set in the 1700s and focuses on a young Comanche girl, Naru, who wants to be a hunter but is shunned by the males who dismiss her mainly because guess what, she’s a woman. It’s pretty clear to the viewer that while she needs some work on her technique, Naru has a thoughtful and more adaptable approach than her counterparts. When the galaxy’s most deadly hobby hunter shows up looking for skulls, the Comanche are thrown into a brutal tête-à-tête. 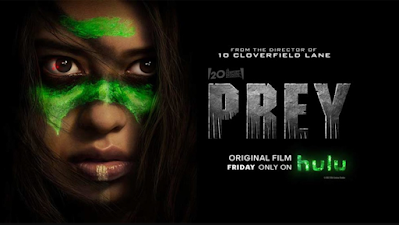 While there’s nothing wrong with it, the first half of Prey is pretty mediocre- methodical and formulaic in its set up. It does build the environment, but I wasn’t exactly hanging off the edge of my seat, or caught up emotionally with the lead character- although she's fine enough as the film’s focal point. The score is sweeping and cinematic, very epic, which is a nice touch to the feel of the film. Novelty factor of the new setting wasn’t sufficient to blow me away at first, though.

When the set up moves into the actual action, the film gather pace and angles and twists and the ugly, masked, space-murderer and his futuristic weaponry tries to outgun Naru’s cunning. The violence and action, mixed with the left turn the story took which I wasn’t expecting, really got me going and Prey is, during its second half, one of the stronger action films I’ve seen this year.

Prey speeds up and ends strongly. It feels pretty fresh, certainly where the somewhat staid Predator franchise is concerned and while it’s not exactly a classic, here is a film which honestly should be on at the cinema. Finally, credit to the writers for coming up with, “If it bleeds, we can kill it!”, a nice update on “ain’t got time to bleed”. 7/10