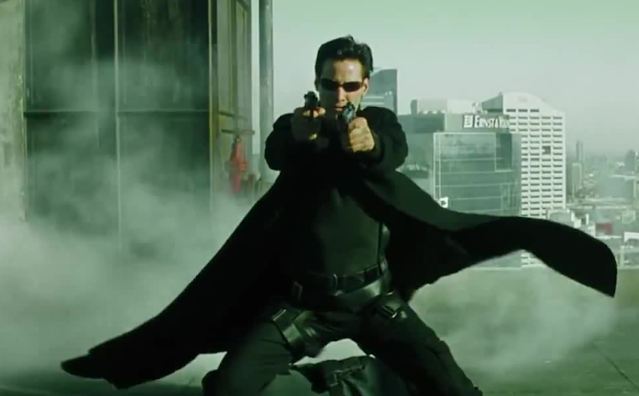 THE MATRIX (trilogy)
There will be some spoilers but even looking at the posters is a spoiler so I feel no guilt. No guilt I tell thee!
Action/ Sci-Fi
Rated 15

Inbound sequel The Matrix Resurrections, which I can only assume is a knowingly apt title, is causing excitement unless you review for The Guardian. The fourth film in The Matrix series comes almost twenty years after the third and there are reasons it is hotly anticipated; the original Matrix film was era defining cinema. Plus in my humble opinion the trailer is pretty boss.

It’s been so long since The Matrix both of the Wachowskis are now women, making them the Wachowskas. Interestingly, only Lana is directly credited on IMDb for writing and directing on Resurrections, with Lilly having the credit “based on characters by”. What this means I don’t know because as a duo I never studied who did what as filmmakers. It was kind of irrelevant to me as long as they made good films, but I’m sure someone else has examined the minutiae of each sister’s skills somewhere.

As the second and third Matrix films were released together, so will my review(s) be. Probably within days. I wrote a lot of notes watching these again. What follows is my reentrance to the Matrix.

To say I loved The Matrix would be an understatement. I saw it twice in the cinema, countless times on VHS, some on DVD and recently decided to buy the trilogy on Blu Ray after some years of a break. Here’s the Bedsit Cinema review of my return to the lot of them. Have they stood the test of time and over-exposure? 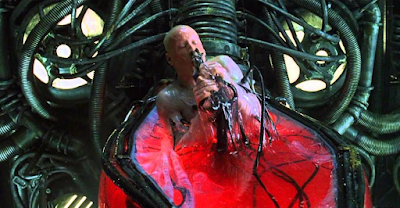 Neo is a hacker, mysteriously contacted online by people reporting to be friends, and hunted by malicious, bland authoritarians he is fast forced into a choice leading down a violent rabbit warren. There is no Mad Hatter, just awakenment.

The Matrix wasn’t just famous for its wardrobe, the watershed CGI advances not only technically, but in application, were unprecedented. Had the effects and sartorial stylings lost their wow? No. I Immediately got goosebumps. It's so fantastically unique even all these years later. I will admit that this might only be to me, but I’m not exaggerating my doubts; I was sincerely concerned I’d now be at the point of disinterest with The Matrix.

How will this all appeal today? I’m not sure. Can I ask a 15 year old to watch it maybe? I don’t know any and asking strangers is a no, no. Although somehow it’s Ok for Jehovah’s Witnesses to harass teenagers to join them. All I want is an opinion, not your soul and it’s very limited options posthumously which is really all the Jehovah’s are after. I found answering the door completely naked discouraged them although with hindsight that could have backfired.

Much lauded for its existential examination, The Matrix does ask questions about the nature of consciousness and experience, but unlike Blade Runner it doesn't spectate it actively engages in the idea. Most good blockbusters ask questions or tap into fears, subtly, usually. Jaws is about an unseen sudden death. Saving Private Ryan is about the mechanised death of war. The Titanic is about how death can ruin car sex. The Exorcist is about God judging us both pre and post death and don’t even get me started on Dr. Zhivago, because I haven’t seen it.

When I was a kid I really envied a friend who got everything he wanted. Every toy, games console, whatever, he had it. While he was a friend and I deeply envied that, I remember saying to my mum that if I swapped places with him I’d be him and I’d be used to it too. I wouldn’t appreciate the swap. The Matrix makes a similar point- if you don’t know life is different, how can you care that it is?

The main strength of The Matrix is that it questions reality by being so fantastically unreal. That and it is fucking cool and sexy and makes you desire that experiential divergence. Well, as long as there’s a flip phone and a three quarter length coat. Nothing short of 10/10.

Check these other series reviews out!...