Director Robert Eggers is a master of atmosphere, though personally I find his films a little hard work and obtuse. The Witch I need to revisit, because it felt like the kind of film I’ll appreciate more second time around. The Lighthouse was lost on me if I’m completely honest, although in the spirit of honesty it was a Friday night and I was very tired and don’t think it got the best me as an audience.

The Northman promised to be a little different to Eggers’ (who is a former production designer) other efforts; it looked more expansive and like the director was slowly making the transition from emerging auteur to “Hollywood” film maker. Growing, rather than selling out.

Starring a very beefed up Alexander Skarsgård, who at six foot four is naturally tall, as Amleth, a Viking with a lifelong lust for vengeance after his father was murdered by his uncle, The Northman has been compared to Gladiator. While this might help to sell the film, it also pigeonholes expectations somewhat which work against it as its own creation. I was hugely excited to see The Northman in the cinema and no amount of cold hard rationalising seemed to temper that. 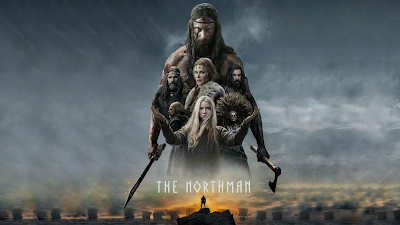 But then, why would you want to piss on your own chips? If the film sucks, you’ll find that out when you see it for yourself. Enjoy the anticipation- it might be the high point before you have to chow down on the cold, soggy piss-potatoes of reality.

The Northman very quickly made it clear it was not going to be Gladiator, except for a lazy revenge parallel. Far more stylised and smaller scale, in parts it feels like a stage production and in others it looks like a Calvin Klein advert. There is a fantasy element which I mostly enjoyed and one or two scenes are borderline brilliant; particularly one where the raiders attack and brutalise a village was stylish, unique and effective. In fact, every technical element of The Northman is expertly crafted, what it struggled with was really engaging me and making me care.

For all its positives, The Northman suffers from a shallow plot which is stretched too thin. While there are moments which suggest Robert Eggers can make more accessible fare, there isn’t enough about this film to captive and inspire or thrill.

While it is certainly worth a watch, The Northman never really got me going. My chips weren’t sodden, but they were tepid. 6/10