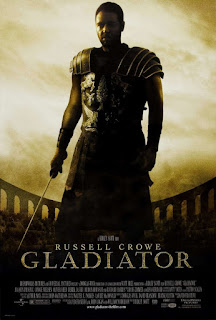 Tagline: “What we do in life echoes in eternity.” Only for some people in certain circumstances. The rest of us are just worm food.

Premise: I almost feel bad having this, but here we go...

Russell Crowe is Maximus Decimus Meridius, commander of the Armies of the North, General of the Felix Legions and loyal servant to the true emperor, Marcus Aurelius. Father to a murdered son, husband to a murdered wife. And he will have his vengeance, in this life or the next.

Gladiator came at a perfect time for me, what with being too stupid for Latin but nonetheless interested in Roman history, I had to study Classics at GCSE. I was overjoyed on the film's release with regards to its reflection of the history I loved. The violent, grisly parts of Roman history, I must stress. I couldn't tell you a thing about how their society ran*, hence the C I got overall. Seeing Gladiator in the cinema was as formative a cinematic experience for me as Saving Private Ryan, or seeing The Descent on my first ever solo cinema trip. But some films wane over time; Trainspotting springs to mind.

The Blu Ray has the Extended edition on, so I went for that, excited by the fact that Ridley Scott's Director's cut of Kingdom of Heaven made an OK film a very good one. However, given the completely disengaged and gloriously grouchy intro from Ridders to said extended edition, with him strongly expressing it is not a director's cut, I was slightly worried. I needn't have been. The only scene I noticed by way of extra narrative, actually explained away what I had thought of as a plot hole.

If you haven't seen Gladiator, firstly I want to know why, secondly, well perhaps I do- it inspires such fervour, is so well written and quotable that morons like me repeating the lines of it in their awful Russell Crowe accent have ruined any iota of a chance you'd give it time. On behalf of us idiots, I apologise. Please see Gladiator. There's politics, betrayal, intrigue and no shortage of bloodythirsty (yay!) action. It's an underdog story, and one scene near the start had me note, “Ha! When you know your son is a wrong-un.”

Gladiator is heart pounding excitement, action which dozens of viewings doesn't dampen, dialogue which one only wishes real life was like (even if just for a day) and a storyline so gripping this viewer has never lost interest, even with the knowledge of what is to come. In short, Gladiator is one of the best films I have ever seen, hands down.

Bedsit it? Fun fact, I have seen the Oscar won by The Mill for their excellent work on Gladiator up close (in its glass box). Not even for a moment was this moving down from 10/10


*Although oddly I know what a hypocaust is and how it works to this day.