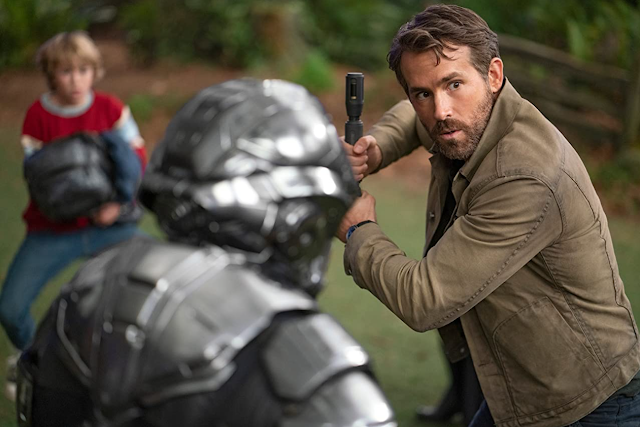 The Adam Project is Ryan Reynolds’ (or RyRey as his lawyers insist I stop calling him) second comedy come sci-fi with Director Shawn Levy in a year, following last 2021’s Free Guy. Free Guy was a lot of fun and perfect switch off entertainment, so I was quite excited to put The Adam Project on. So excited, in fact, that I forwent the projector in favour of the 3D conversion button on the TV, something I haven’t done in ages. But was it worth it?

I’ve been very aware, like the rest of the world, that things aren’t exactly sunshine and roses at the moment. OK we’ve got it easy in the UK, but because reading the news has become an exercise in misery and looking at the reviews I have ready and posted recently, it seemed like a good idea to watch something “nice”, and write a “nice” review about it.

The film centers on a small twelve year old boy, with a mouth that talks him into trouble called Adam- can’t think why I immediately identified with that. The Adam Project is an unabashed sci-fi comedy with an awful lot of heart and some not so subtle Star Wars idolatry, which didn’t bother me but I can see why it might irk others. Adam’s future self, played by RyRey, shows up and soon the two are engaged in a multi timeline battle to save the future. Does this mean I’ll grow up to be RyRey? He was born in 1976 so I still have a few more years.

To be honest in that short time frame I’d be pleased to just grow up.

Reynolds does have a schtick, and it’s one I enjoy, but the film knowingly and nicely apes and at least acknowledges that, bordering on playfully mocking it at times. The interactions between the older and younger Adams are amusing and Walker Scobell as young Adam is excellent, I really enjoyed his performance. Adam(s)’ (I have no idea where to put the possessive apostrophe there) father (Mark Ruffalo) died over a year before we meet young Adam and his mother (Jennifer Garner) is struggling.

This is where the emotional heart to the film beats. The Adam Project isn't a serious film by any means, but its centre I found to be incredibly sweet and a bit emotional. It genuinely made me well up unexpectedly- much like I have a random memory of inexplicably finding a scene in Adam (!) Sandler comedy Click overwhelmingly affecting. And that’s all I really have to say about that.

The time travel and action and comedy come together very enjoyably and with the 3D on I regained a love for the format, it really worked with this film. 3D films are great fun. The Adam Project whizzes around and brings characters together with lots of witty quips and some fun set pieces. I honesty couldn’t have picked a better film for my mood at the time.

It made me laugh and smile, it excited me and kept me glued to it and out of the blue it made me feel lucky and grateful to have what I have. I think we all need that. Emphatically, yes, watch The Adam Project. Unless you write for The Guardian, obviously. 8/10