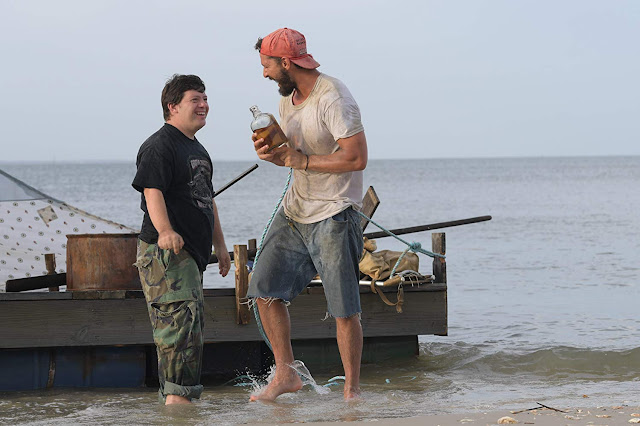 The Peanut Butter Falcon was one of the trio of films I rented before the closure of For Your Eyes Only* and I chose it because I needed something a bit happy. It said “feel-good film” on the DVD box and DVD boxes never lie, do they. Like a few other films I’ve rented I deliberately didn’t watch a trailer or read much other than the brief IMDb premise. This has been a dicey game in the past, but I love throwing caution to the wind. I once ate a fig. It was awful.

A man with Down’s Syndrome, Zak (played by Zach Gottsagen) escapes his care home and bumps into Tyler (Shia LaBeouf), a lost soul on the run through the southern states. Zak is travelling south to join a wrestling training camp. Zak’s careworker Eleanor (Dakota Johnson) tracks him down and ends up joining the unlikely trio in a road raft trip come flight and fight story. 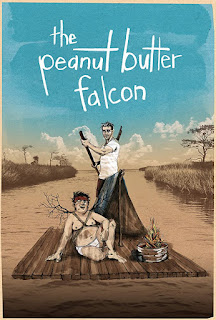 I love the southern states. The more south the better. The lowest I’ve been is New Orleans, far and away my favourite part of the USA so far, which isn’t the farthest down the map. I’m told the Bible Belt is less fun for atheists but I still want to see it; Southern Hospitality isn’t a fallacy. The scenery and landscapes and swamps and sun in The Peanut Butter Falcon made me want to go back. As the characters float down the country It is all rather beautiful.

Shia LaBeouf is an actor I like, Dakota Johnson is a bit meh and Zach Gottsagen is excellent. As the journey becomes more committed and the drama elements kick in it is hard not to fall a bit in love with them. Even Johnson, but I think her character being a bit flat was simply in comparison to the buddy bond of Zak and Tyler- which really drives the film. The Peanut Butter Falcon is funny but in a drama with laughs way.

There is no element of exploitation of Zak’s Down’s Syndrome and unlikely ambition to wrestle in the film, but there is a wonderful sense of love and humanity. The DVD box didn’t lie to me. I very much enjoyed The Peanut Butter Falcon and I think in these times we all need a feelgood film.

Bedsit it?
While not massively moving The Peanut Butter Falcon is incredibly happy, quirky and entertaining. An easy, happy watch. 7/10
*For Your Eyes Only has been forced to shut due to this bastard virus. I know there are more important things at the moment but this is in the Bedsit Cinema world and I am upset about it and want to acknowledge their importance to this site.

Gulam, John et al thank you and I will see you soon.