The Mighty Ducks’ Director, Stephen Herek, was also in the seat for Critters, Bill & Ted’s Excellent Adventure, Don’t Tell Mom the Babysitter’s Dead, Mr Holland’s Opus and 101 Dalmations (which I went on a date to as a 12 year old). That’s a pretty decent CV for solid, fun, eighties and nineties cinema and one very awkward date where her brother had blatantly stalked us to the cinema. I hadn’t seen the film since I was a kid myself when it came out but I had good memories and who doesn’t like a reminder of the good times they had as a child.

The opening gambit is the kids filling a handbag with dogshit then enticing people to steal it for their own amusement. You wouldn’t see that in a Disney family film these days. The Mighty Ducks immediately has more edge than every Disney Princess film and all of the recent Star Wars. Sure, nobody dies in The Mighty Ducks and the only evil forces are a law firm and a bastard ice hockey coach, but when do you see kids playing with canine street-turd? Cinema needs more cheeky-chappie scat wars! 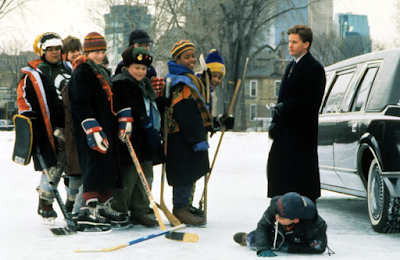 Emilio “interchangeable with brother Charlie Sheen” Estevez plays Gordon, a lawyer who is made to do community service coaching a pee wee ice hockey team. He inherits a bunch of such rag-tag outsiders, they even have girls in their team! Scruffy and full of poo-based practical jokery, his ego clashes with his past as a future hockey star. Elsewhere in the cast are English legend Joss Ackland and a young Joshua Jackson. Purely by coincidence, I watched Queen of the Damned the night before The Mighty Ducks which has an all growed up Marguerite Moreau in it- she’s one of the girls on the team in Ducks.

The “baddies” (a rival children’s hockey team) are bland, assembly line, Mormonesque monsters. That hideous, charmless confidence, lack of individuality and dead eyed charisma the US seems to value so highly makes them Village of the Damned on ice. That’s the point of the film of course; The Mighty Ducks are the outcasts, the outsiders, the misfits and by virtue of that actually have a personality. The Ducks’ rivals are also led by Gordon’s former coach who still harbours a grudge against the now indentured lawyer. You couldn't write this drama, you honestly....

I like the message of The Mighty Ducks and while that message is still just about visible in today’s wanky woke whitewash what’s so good about this film is its delivery, its revelry in anarchy. The joy of genuine “fuck it lads, give ‘em hell, win or lose” I haven’t seen lately. I will admit that my currently not being eight years old and therefore not watching many Disney kids’ films has withered my viewing rainbow of joy spectrum somewhat.

The Mighty Ducks is an innocently charming underdog story, with handbags full of dogshit. A well trodden narrative ice skated over wonderfully. I was really caught up in it by the finale. Exactly the kind of rainy day cheer that’ll take you back or bring you new fun. 7/10