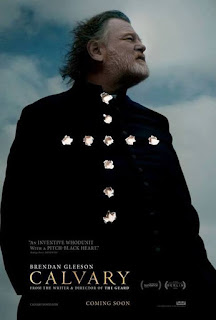 Tagline: “Coming soon”. A little insensitive given the subject matter.

Premise: The victim of sexual abuse at the hands of the clergy tells his local, in no way guilty of that, priest he will murder him as retribution. It is the priest's choice whether to accept the execution or walk away. Weirdly, Calvary is incredibly humorous.

Delivery: “I think she's bipolar. Or lactose intolerant. One of the two.”

Brendan Gleeson is not your average clergyman. He's unconventional and without going into theology too much, actually applies the teaching of Jesus who while I don't believe was magic, I do believe was a good man. Calvary begins with his character Father James taking confessions, and a threat to his earthly (only) existence by a disturbed- at the hands of the church- parishioner. Choose to live, or to die for someone else's sins. The clue is in the title- Calvary.

The film is one massive, in some ways funny, in other ways very much not, ethical dilemma. It is a deeply, deeply thoughtful and poignant piece on the church's role as confessors and patriarchs. With added jokes. Handled with way more skill, humour and respect than I've managed in this review so far. Calvary is meaningful, thoughtful, hilarious, and well made.

For example, Domhnall Gleeson, the son of the as usual excellent lead Brendan, has only minutes to utterly convey insincerity on a psychopathic, murderous scale. He nails making the viewer hate him, then boils the film down by positing an admittedly knowing, theological quandary,

Wherever you land on the theological toss of a coin, the witty, winning pull into one man's huge existential decision, Calvary's story portrays an inescapable embracing of our shared humanity. It is also a murder mystery, but one where the potential victim knows his killer. The audience does not, and is left guessing from the many angry and weird characters he has around him. Calvary is a comment on the nature of sin and also examination of the very principles the Christian faith was built on. How the hell did they make it so funny?

Bedsit it? Presented with deft skill, love and humour. If you don't enjoy Calvary you don't deserve cinema. 9/10