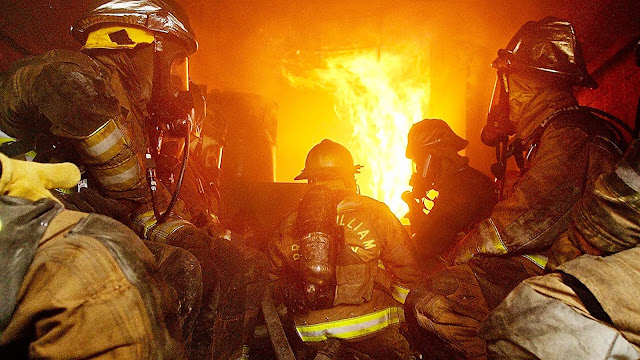 Backdraft (1991)
Spoiler Free
Drama/ Crime
Rated 15
Backdraft was revered by my mates when I was a teenager. That’s all I remembered of it. Backdraft was revered like Sunny Delight, Reisen Chocolate rip-your-teeth-outs and lying about getting kissed by a girl. Backdraft was cool when I was younger. I even remember doing my fire safety badge with the Scouts at Forest Hill Fire station and thinking wow, these guys are really cool, but why do they have a Barbie Doll that someone’s glued pubes too.
The firemen in Backdraft don’t have any #MeToo toys but there are other issues, both in the story and with the film.
A terrible, cheesy, opening underpinned by some of the worst child acting makes you realise why Hollywood consistently casts thirty-somethings as teenagers. Macaulay Culkin got so (Richie) rich because he was actually plausible i.e. an anomaly.
Despite the toe-curling kiddie catastrophe, Backdraft does set itself up well. Ron Howard is a director I like. In fact I’ve just realised my last review (Pavarotti) is also a Ron Howard film. You’re welcome, Ron. Kurt Russell I like. Robert De Niro I like. Donald Sutherland I like. Slam dunk, right? Well at first Backdraft looked like it was going to be; it’s engaging and easy to bond with the music and visuals.
In fact, the effects are astonishing. Thirty years on and still powerful, believable and pretty much the only reason to keep the film on. Kurt Russell and William Baldwin (no me neither) are firemen brothers with a longstanding feud, and their squabbles get entangled with the rather more important issue of a murderous arsonist on the loose in Chicago. There’s petty politics and straightforwardly predictable plot which I could live with if it wasn’t for the fact that all of them are wankers. Pillar to post pricks. 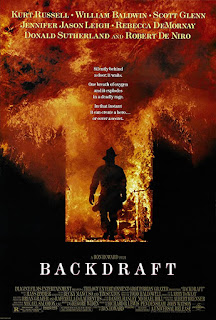 Every character smokes, which you’d think would be something of a stupid thing to do as a fireman, but then it’s not like their lungs haven’t taken a worse beating on the job.
While Backdraft bounced between breath-taking and boring I started trying to name the Baldwin brothers. I know Alec takes the piss out of Donald Trump and I like him for that. Stephen went all loony-tunes God botherer and was on Celebrity Big Brother if I remember correctly. Talking of Big Brother, was Jade Goody famous for being on Big Brother, then on Celebrity Big Brother? Am I right in thinking that? Man, how meta.
As you’ve probably noticed my attention dipped in and out during Backdraft. It was revered by my teenage friends, sure, but teenagers are idiots and Sunny Delight is fucking awful.
Bedsit it?
Backdraft is frustrating because in places it is thrilling and well made, but massively suffers from Raging Bull syndrome. At one point my notes read “all of them could die and I wouldn’t care, in fact it would probably make the film better”. I made the end though. I like fire. 4/10
Like you some fire? These reviews burn like the clap...
FAHRENHEIT 11/9
SPIDER-MAN: FAR FROM HOME
300: RISE OF AN EMPIRE
OUTLANDER
SCARY STORIES TO TELL IN THE DARK
Labels: Action Adam Thorn Backdraft Bedsit Cinema Drama Film review Kurt Russell Robert De Niro Ron Howard