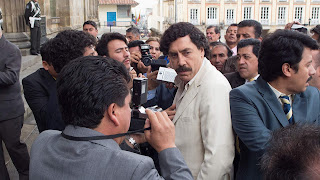 I’ll admit two things right off the bat here. Firstly, I rented Escobar in something of a rush because it was getting embarrassing my having been in the rental place for half an hour umming and ahhing. Secondly, this isn’t really a review of Escobar, there’s a twist.

Having seen every season of Narcos, I wondered whether Escobar would be a futile watch. I knew most of the Pablo Escobar story before seeing Narcos, though, so there was hope. Plus I like Javier Bardem, largely due to his performance in No Country for Old Men as death incarnate- Anton Chigurh. Having said that I have no feelings whatsoever either way on Penelope Cruz and director Fernando Leon de Aranoa has done so little I know about I almost couldn’t be bothered typing his name.

My initial thoughts were concerned mainly with practical effects, which my three regular readers will know I love. Concerned specifically with prosthetics, and not good ones. Javier Bardem’s Esco-belly is surely fake? It doesn’t look real and if it is, he may well need to see a doctor. Also, accents. Penelope Cruz, who is Spanish, in places sounds Pakistani. Either that or I’ve had a stroke. Can anyone else smell blue?

About three quarters of an hour in, my mind wandered, getting bored. Some fucker better get shot soon. All I could think of was Deadliest Warrior. If you haven’t seen Deadliest Warrior, or specifically the episode featuring Pablo Escobar’s Medellin Cartel "took on" against Somali Pirates then you’re missing something... weird.
The whole Deadliest Warrior phenomenon was an interesting, completely mad phase of television. Distasteful for some no doubt, it being essentially weapon porn with zero regard for the real life human implications of its glib approach. A show which existed so far outside of the sane and ethical world it was impossible to realistically hold it to rational judgement; like psychopaths and Apple.

The gory gun lust series also (genuinely) has episodes featuring the IRA facing off against the Taliban and Saddam Hussein versus Pol Pot. This is not a joke. Check out their Gurkhas against the French Foreign Legion episode.

You know what's coming though, don't you. I loved Deadliest Warrior. Loved it. What that says about me there is a team of professionals attempting to work out. I’m not alone though, as it was popular and if you’re watching a film like Escobar the chances are you’re at least on the same slippery, salacious, slope of sadism as we others.

Bedsit it? It’s not that it’s a bad film per se, I was just really not in the mood for Escobar after I’d recalled Deadliest Warrior’s glory. The DVD went back unfinished. Would it be fair of me to review and score Escbar based on that? Probably not but I will. 3/10

Deadliest Warrior. They had a fucking Zombies vs Vampires episode, with a live show worked in, and Max Brooks. 9/10- it knew what it was and didn’t apologise. Ever. For anything. Blam Blam!