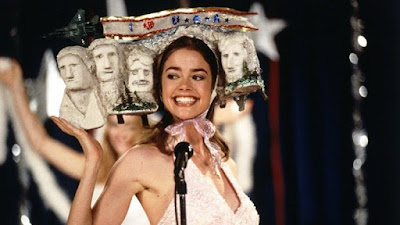 I’m not going to try to out funny Drop Dead Gorgeous. It just happens naturally. Zing!

Seriously though, I hate reviewing comedies. Don’t know why but I do. Ok, I probably do know why, it’s because I like to try to be funny, as my (tongue in cheek) comment above lets slip. A funny film would only be malserved by my attempts at mirth; and Drop Dead Gorgeous is a very funny film.

A spoof documentary centring on a beauty pageant in a small town in Minnesota, Drop Dead Gorgeous has a wonderful cast. Kirtsie Alley and Ellen Barkin play the mothers of Denise Richards and Kirsten Dunst’s competition hopefuls. The supporting players are hardly paper thin; Amy Adams and Brittany Murphy are but two more of a depth of talent in the ensemble. The peripheral characters are barmy, hilarious and well portrayed.

All of the cast really commit to that awful Minnesota accent. It’s excruciating, but funny.

Dunst’s character Amber Atkins lives in a trailer with her alcoholic mother (Barkin) and works in a funeral home. She’s nice, too nice, but Dunst sells it brilliantly. Alley’s Gladys Leeman is a former pageant winner, now host and superpower who is confident her daughter (Richards) will win and is in a position to ensure that happens. It’s a straightforward two horse race, mainly because the other contestants keep being murdered…

Drop Dead Gorgeous is a smart film which presents as dumb. It’s laugh out loud, yes, but it’s clever. Far too clever for the mainstream American market, which is a shame because it’s an American film (thus made little money). It is also, crucially for me, a dark film which presents as saccharin. Violent humour hides in the beauty and bright colours. It reminds me a lot of Addams Family Values- a film which truly manages hilarious horror in broad daylight. It is a remarkable skill to achieve this paradox and make it entertaining.

Bedsit it? I’ve seen Drop Dead Gorgeous countless times since it first came out, but it still had me howling. There’s so much more to it than it lets on. The biggest travesty is the according to IMDb, writer Lona Williams not got the work she deserves and director Michael Patrick Jann has gone to TV. Good for TV, a loss for film. 9/10
Labels: Adam Thorn Amy Adams Bedsit Cinema Comedy Denise Richards Drop Dead Gorgeous Ellen Barkin Funny Kirsten Dunst Kirstie Alley Minnesota Review