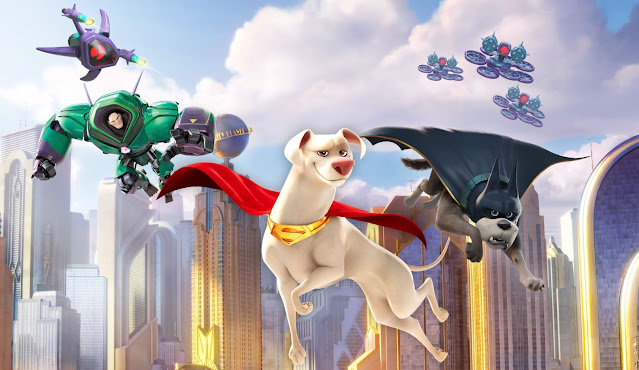 Years ago, in my very early twenties, I was a runner for a post-production company in London. As a runner you basically fetch coffee and carry parcels, but at pace because everyone above you (and that is literally everyone) is busy and angry and makes important adverts for cut priced DVD players or orange juice or whatever. Do what they say and fast. Despite the smorgasbord of arseholes way above their station, mostly lacking in any discernible creativity, I met some lovely people and learned a lot in that line of work. Plus I have some cool stories.

My girlfriend wanted to see Super-Pets, otherwise known as DC League of Super-Pets, and I wasn’t against it at all. I just hadn’t heard of it, unlike Black Panther: Wakanda Forever which we also saw on her choosing and let’s just leave it at Wakanda Forever is a steaming pile of shit that might prevent me from going to the cinema for a while because the other people there were as awful as the film.

Anyone with half a brain knows what a film about Superman’s dog is going to offer, and DC have form for cute reproduction of their established names (Supes, Batman, Wonder Woman, The Flash, Aquaman) with the LEGO iterations. While the set up and established, arguably overtold, legacy of these cartoon heroes could render Super-Pets less potent than a clipped pooch, I very much enjoyed it.

Boasting a great voice cast, Super-Pets is undeniably funny, juggling jokes from the superhero and animal perspectives as well as just the kind of observational asides which make the film achieve more than just predictability. And look, it’s a children's animated film, I should reiterate; a film about a flying dog and other cuddly superhero subjects. I knew what it would be, I hoped for slightly more and Super-Pets delivered. At its end credits I was happy I’d seen it- and then... “Production Designer - Kim Taylor.”

All those years ago when I was a mere minion at the film company, there was a young matte painter who was always lovely and taught me a lot about the processes and history of post-production. He once showed me how easy it was to edit an image, pulling up one of London’s Oxford Street from Google and painting it into a post-apocalypse in minutes. The very man now credited as production designer (which for those who don’t know, is one of the most creative roles in making a film) on Super-Pets. Great work, Kim, if you ever read this.

Sure. Super-Pets doesn’t have me begging for a sequel but as a person for whom the superhero element was almost irrelevant, it does entertain on all of its elements. I have one small gripe related to story progression which felt like the makers were in a pinch and hoped nobody would notice, but that’s nit-pickling. If you think you’ll enjoy Super-Pets, you probably will. 7/10