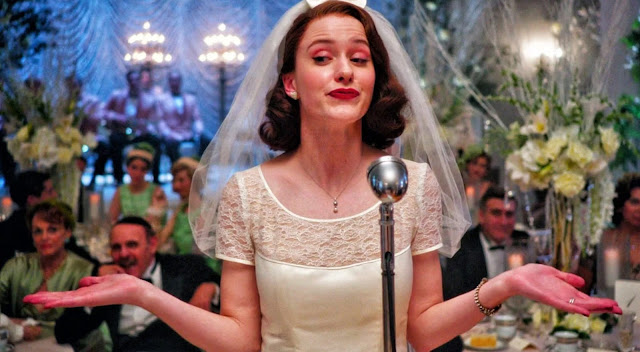 As a rule Bedsit Cinema hasn’t done reviews of TV shows, but I’ve been asked about doing it and given I don’t like rules at the best of times, it would be perfectly in keeping with my character for me to break my own arbitrary limitation like a renegade. Fuck me, yeah, what a prick. The Marvelous Mrs. Maisel was recommended to me by my father, who to be fair likes a lot of the same things as me. My concern was that it looks like a chick-flick-made-series and my father also enjoys musicals, so I can’t trust the wily old dog completely.

Part of why I've resisted TV shows is the idea of reviewing their length and complexity with an, admittedly self-imposed, spoiler free approach. The Marvelous (no, I don’t know why it’s missing an l either) Mrs. Maisel is eight, hour long episodes a season. There are four seasons ready to watch currently on Amazon Prime. Those are the facts. I’ll stick to a review of what the show has to offer you as a whole, rather than any spoiler-y plot points.

Entitled housewife Midge Maisel, who happens to be Jewish and although it’s a huge part of the story if I led with a hard J, in these times... I’ll stick to wank jokes thank you. Not in a Weinerstein way. Oh for fuck’s sake what a minefield politically correct dick jokes are. Anyway, Midge is thrown through the fragile ice of happiness after her husband leaves her,  but stumbles into a potentially mercurial talent for a comical constant stream of consciousness.

Having recently rewatched the brilliant Six Feet Under with my girlfriend, who after this amount of time I’m pretty convinced is actually real and not a prolonged seizure, we needed something new. She’d not Seen Six Feet Under and we both laughed, cried and got caught up entirely in its wonderful, humorous melodrama. Something fresh to us both was needed. Mrs. Maisel’s pilot episode was screened with appropriate apprehension, given that my Dad also told me Frozen is a good film.

This being set in late fifties New York, there’s plenty of room for sexism and jokes about sexism, as well as loads on Jewish life. It's actually rather fun Googling some of what's said; as a goy I know not the vocab. Jewish people have a reputation for being funny, if somewhat neurotic. I'm a raised Catholic, who have a reputation for stony faced doctrine. The Romanites really only have Father Ted to show for their humour. Brilliant as it is.

Mrs. Maisel was the first online/ streaming show to win a major award. It is, from the word go a slick, stylish comedy with side splitting, laugh per minute cleverness. In its first season run it hits the mark on every level and so far hasn’t really wavered in ability to bring laughs into my hollow little existence. It has no right to be this good, and simultaneously have such mass appeal. All the things in the show I worried I'd be put off by I love, all the things I should love I love even more.

Shot with sumptuous costumes, choreography and camerawork, with many scenes being one take, sweeping, moving cogs, The Marvelous Mrs. Maisel boasts excellence in every area. The writing is razor sharp, zipping along with precise delivery from every cast member; Rachel Brosnahan (Midge), Alex Borstein (Midge’s acerbic champion) and Tony Shalhoub (Midge’s father) are my personal favourites . It helps that the show, with such a plethora of characters, doesn’t lean on villains per se, and the peripheral people get their moments too.

This is not a show anything like Six Feet Under, I only compare them because of the flow from one to the other in my own life. Mrs. Maisel is far funnier and less interested in making you weep or rage at the screen than that HBO classic. Saying that, though, it is not by any means monotone and simply about laughs, it is not a weightless chick flick/ show. There is hilarious, creative swearing and it skewers everything which walks into its sights with aplomb.

We binged all four seasons currently available on Amazon Prime, with a fifth due next year (I assume). I would be hugely surprised if The Marvelous Mrs. Maisal loses much on a rewatch given how much detail and wit is injected into every frame, every quip and aside it rattles through. Much like a good standup, you’ll roar the whole way through then not really be able to quote anything which was said at the end because you were busy taking it all in. Quite simply brilliant in every element.

As Midge Maisel bumps along her journey into comedy, with all the ups and downs which come with it and the desire to keep it secret, the show’s mischievous brilliance had me enraptured. It seems my Daddy was correct, and the more people I talk to about the more I find who love it. Has to be a show for everyone, and perfect couples viewing. 10/10