In the Flesh: Dominic Mitchell Interview 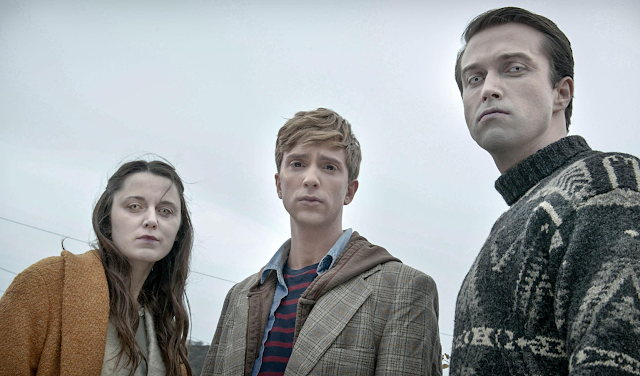 Dominic Mitchell, the BAFTA winning writer and creator of cult zombie drama In the Flesh, spoke to Bedsit Cinema about the show’s journey from concept to TV, how Danny Dyer indirectly helped its creation, his ideas for a third series, and what he is working on at the moment

In the Flesh is one of the best TV shows ever. Sure, that’s my opinion, but it’s a cult show with a very loyal fanbase who still want to see more from it (and may even get their wish). It’s currently on BBC iPlayer so you can check it out for yourself, I urge you to. I was incredibly lucky to have a chat with In the Flesh creator and writer Dominic Mitchell, who won a BAFTA for the gritty zombie drama.

The show is set after the return of the dead, who are now semi-alive “Partially Deceased Syndrome” sufferers. With powerful themes strengthening the characters including suicide, sexuality, racism and politics, it is no straightforward zombie dust-up. Mitchell remarks, “what if Alan Bennett and Ken Loach made a zombie show”. It feels a very personal story, and he is honest that he drew on his own experiences, initially writing “a play about a young man who has a psychotic episode, is medicated and goes back to his village.”

“He has to cope with what he’s done, all the village hates him and his family are very disappointed in him. The main character is me, when I was a teenager living in a small village and I was a black sheep.” 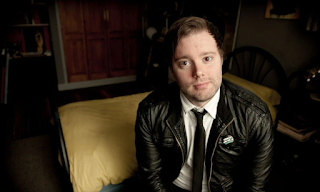 This play was then spliced with the undead when Mitchell “watched this really bad horror film, I think starring Danny Dyer. It was the typical zombie where there’s a bunch of survivors and they have to go from A to B. I just started siding with the zombies.” The new incarnation was “fit for a series”, and BBC initiative Northern Voices picked up Mitchell’s pilot- “really good mentors who nurtured the idea. I was lucky really.”

With a literal Bible of its world ready for In the Flesh at the start of production, Mitchell says the guidance he got drove the show into its very intimate, family based series one. Main character Kieren returns home to Roarton, a small Lancashire village, four years after the rising of the dead, of which he was one and is now a PDS sufferer.

“I was planning for all these things to happen, but the advice I got on the first series was ‘focus on Kieren, focus on his family’ and that was a really good note because it made me concentrate on that.”

Understandably, being a somewhat niche, supernatural drama set in a small village, which drew from his own past, Mitchell had fears the show wouldn’t resonate with its audience. “I didn’t expect a lot of people to connect with it, because it’s too personal. When it first came out, on Twitter although we got a lot of praise we also got criticism from people who didn’t get it... The critics got it.”

Speaking for myself, In the Flesh’s theme of suicide, and facing the consequences of that, really hit home. I am not alone, clearly. “It took a while, but it gradually won people over and the fandom it’s got has been fantastic. I’ve got letters from people as far away as China saying they’d connected and it helped them through dark times.”

“The make up, the performances, the direction and cinematography were exceptional as it was a small budget and it really elevated the writing.”

Following the first series, Mitchell got an offer to work on second the run of Channel 4's Utopia; it stopped the BBC “umming and ahhing”, and series two of In the Flesh was greenlit. It was on a tight schedule, “the commission was for six episodes and we only had about three or four months to write it all so it could film to be released next year. Looking back I wish they would have said yes by the third episode [of the first series].”

A six episode span allowed Mitchell and team more space to expand the story he already had in mind. “We could go out into the world a bit more, I wanted people to see what a city looked like after the apocalypse… that was really great to get to. But I still wanted it to be domestic, based in Roarton, which is a microcosm for the world. We always wanted to ground it in reality.”

In the Flesh’s second series really does evolve the story brilliantly, and it was frustrating for fans when it was cancelled. Political prejudices and religious risings grip Roarton and the nation writ large. The show felt like it was flexing its muscles and growing in ideas. Mitchell, unsurprisingly, also laments its abrupt end, “the BBC told us to end series two on a cliffhanger, so we were pretty sure it was coming back for a third series. I had all of these ideas brewing in my head. They didn’t account for BBC Three going under.”

“I’ve had constant tweets saying people want a third series. I’m not someone who can magic the BBC into making a series and I can’t afford three or four million pounds to make a series or a film!”

All of this leads us to the present day, eight years after series two of In the Flesh drew its last, thrilling, breath. With fans still vocal about wanting to know where the show was going, Mitchell is working on a Go Fund Me project- a fantasy episode one script for series three along with an accompanying podcast. “I’m careful to say it’s a fantasy series three”, he explains. The original cast have read and like the script so far, and would hopefully be involved in the podcast.

Giving a sneak peak, Mitchell tells me the show would become more focused on Halperin & Weston Pharmaceuticals who have a stranglehold on the government with their “cure”, Neurotriptyline. The themes more than resonate in our new-normal, peri-covid existence.

“It’s how a company is profiting from a really tragic event. The idea of living in a post apocalypse world where the nation has been boarded up and has to take injections or be a pariah. PDS sufferers are being forced to take this medication and wear contact lenses and cover-up make up. They don’t want it for safety reasons, or to make people comfortable, they want to profit off it.”

“Halperin & Weston are the threat to these characters that we like and love.”

Taking inspiration from a trip to Israel and the West Bank, Mitchell teases exciting and terrifying societal divisions in Roarton, where tensions are now at pressure cooker status. As if things weren’t bad enough for PDS sufferers in series one and two! It is fascinating to hear his thoughts and plans, and the fantasy first episode is the first step back into that world.

As well as the hugely exciting In the Flesh development Mitchell is working on a few feature film scripts, “which are sort of in the horror genre” as well as other TV ideas. He speaks insightfully about his style of storytelling, “I think genre is something that you can really use to your advantage.”

“You can say so much in a genre film that if you’re doing a straight drama, isn’t as effective. So I can talk about all these social issues but hide it under the cloak of a genre, be that action, fantasy, romance, or be that horror. That’s what I think I’m good at.”

The question fans will all want to know, though, is if the podcast and fantasy script for In the Flesh hit home, could there be a series three filmed? “You never know”, he says.

Follow Dominic Mitchell on Twitter to keep up to date with all the latest In the Flesh news, as well as his other writing advice and seminars.