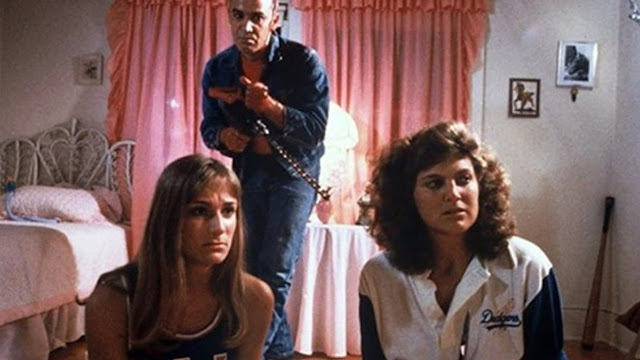 Screened as part of the Forbidden Worlds horror festival, I came down to Bristol from London to see an old friend and we chose The Slumber Party Massacre, late on Saturday night. A hardcore crowd of horror fans, some whom had been at the cinema for the film shown before (Elvira: Mistress of the Dark), were treated to an introduction to the main feature by filmmaker Sophie Mair. Horror short The Thing That Ate the Birds (2021), directed by Mair and Dan Gitsham, was shown before the main event.

The Thing That Ate the Birds was a lean, creepy and unsettling twelve minutes which I very much enjoyed. While it didn’t have time to expand on its story which had depth behind it, there was a pleasingly viscous vibe to the film. Neither me or my friend were expecting The Slumber Party Massacre to have anything like the tension or tone, though. 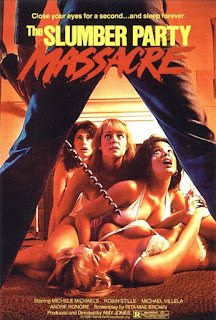 Much was made by Sophie Mair in her introduction to this film about its being written and directed by women (Rita Mae Brown, Amy Holden Jones). Now, perhaps there was some clever commentary I was missing, but the first scene is an “eighteen year old” baring her chest. Fairly quickly follows an all-female high school basketball game with lots of bouncing breasts and a shower scene where the camera took delight in looking the girls up and down. If you really wanted to assign deeper meaning to it you might be able to argue that it was ironically highlighting the pervasive voyeurism of horror… but it felt like tits, have a look at the lovely tits.

While I am hugely skeptical of The Slumber Party Massacre as some sort of bastion of feminist cinema, it does have a knowing sense of humour which elevated the silly plot and ropey acting. An escaped killer with an unfeasibly powerful cordless drill, which definitely isn’t a metaphor for his penis, terrorises nubile teenagers who have the house to themselves- bar a pervy neighbour and some pervy boys who creep about. Characters are picked off by the killer, who looks a lot like a sweaty Herr Lipp having a double denim day in Dusseldorf. 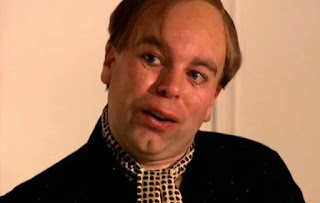 There is a scene in The Slumber Party Massacre where one of the girls has a wall of weapons to choose from and picks up and puts down tools of increasing violent potential… I’d be very surprised if Quentin Tarantino hadn’t also seen this film. There are funny little moments and some gore, but nothing which really makes it anything more than an enjoyably dated piece of cult cinema. It was nice to see it on a huge IMAX scene with a crowd who seemed to have much the same level of expectations of the film as we did.
Bedsit it?

I hesitate to give a resounding yes, because much of what we enjoyed was the setting and company. The Slumber Party Massacre has a few nice, playful and clever chortles at horror tropes and doesn’t pretend to be more than it is. Some better gore effects would really have bumped its score up, but this a glass half full 5/10.