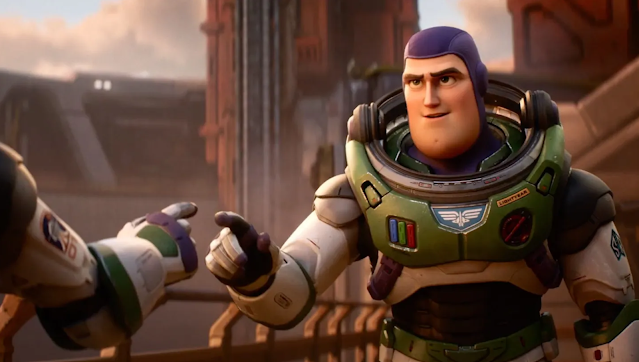 I knew nothing of Lightyear at all except that it very much smells like Toy Story’s side hustle. I had not even read a plot synopsis. Ah yes, plot, I sometimes forget to mention them. Lightyear has a plot.

Billed early on as “Andy’s favourite movie”, Lightyear is supposed to be the film which made Toy Story’s main human fall in love with Buzz Lightyear. Apparently that doesn’t fit with what’s actually in the original film but it made me think, is Andy an idiot? If Lightyear is a bunch of crap will it rip the foundations of any love I had for the series out by making me think the cute, warm-hearted little boy is in fact a dithering imbecile who couldn’t even notice his fucking toys were alive?

Buzz, played here by Chris Evans, not Tim Allen, attempts to travel home from a planet he and his ship are marooned on. Instead, he travels forward in time, and as the years on the planet roll away he ages only days. Then he returns to find the planet decimated by robots called “Zurgs”, and has far more on his plate than just turning back the hands of time (don’t know why they didn’t use the R. Kelly song, has R. Kelly done something that would preclude his music from being used in children’s films?).

Evans sounds fantastic as Buzz, a luxurious voice which sounds a lot like Allen’s iconic, daft space hero. Animation is crystal, perfect Pixar and obviously far advanced from that in the 1995 Toy Story original. Given Lightyear is ostensibly a film within the Toy Story series, not an actual Toy Story film itself, this didn’t bother me. In fact I found it rather pleasing to look at. 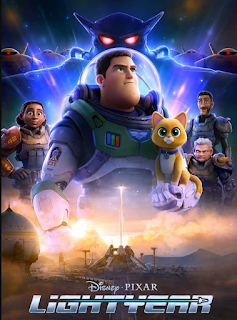 There are plentiful, decent laughs and running jokes to be enjoyed. IVAN, the terrible autopilot is fun, and Sox the robot cat sidekick in particular stands out. Sox is fucking great, I challenge anyone not to love that character. The story zips along and has echoes of other sci fi and pop culture: Aliens, Star Wars, even Maverick and Game of Thrones nods and blah blah blah look what a bloody annoying film buff I am. Pixar knows how to keep adult eyes busy during a family film, Lightyear is pleasingly on par in that respect.

The little details, observations, just add that tiny bit, something which makes you think someone cared about the viewer when they made the film. It’s what sets Pixar out, even in its weaker efforts. The film makers seem to care. It seems like plenty of their Directors are ex animation leads, perhaps that’s where the attention to detail and sense of wonder come from. Perhaps they’re just cheap. Who knows.

Lightyear is more than a side hustle, or perhaps more accurately, its a pleasant side hustle which offers solid entertainment and I did not regret watching at all. Andy is not an idiot, although I'm 38 and won't be buying a Buzz toy.

With a below average IMDb score, you could be mistaken for thinking Lightyear is a below average film, but dig deeper and 28% of those votes were 1/10’s which always stinks of disgruntled protest votes to me. Personally I found it all rather charmingly silly, with Sox being enduringly endearing. Only a sour puss couldn’t smile through this film. 7/10