X writer/ director Ti West has established horror form, but I’d argue not quite the status it’s often implied his films carry. That said, I still haven’t seen The House of the Devil which is supposed to be excellent.

The filming of said late night adult feature is shepherded off to a remote location in Texas by its unscrupulous, walking #MeToo moment producer to save a few quid, and the softcore titillation eventually climaxes in claret. By eventually, I do mean eventually.  To continue the Bill Hicks softcore reference, “now there is a frustrating hour” as one waits for the warm, sticky liquid bursting from throbbing veins like, well, you know. 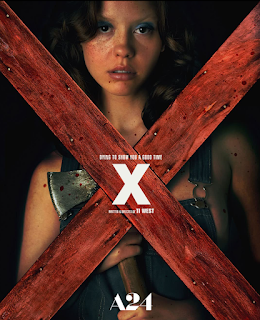 Boasting some Devil’s Rejects vibes, X has a great look to it- I very much like the way it’s shot and edited; grimy but in a stylish way. In the narrative conflict there’s an almost an air of sadness, a wistfulness at wasting away unseen and undesired; this drives the anger and violence, which is why anyone is watching X. It’s a neat twist on the motivations of murderers in horror films such as these.

After some foreplay, but no hairy, bobbing man-ass X becomes a fun, solid horror with plenty to like but perhaps not as much about it as people have made out. With a prequel being finished up, a film I’ll definitely watch, X is worth the effort. 6/10