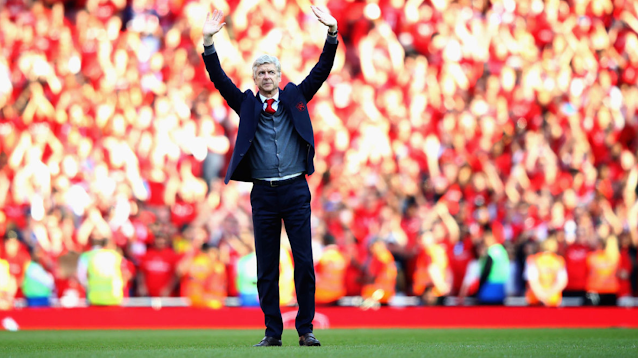 Legendary Arsenal Manager, and subject of this documentary, Arsene Wenger, once claimed that he thought his team could go through an entire league season unbeaten. That’s thirty eight games, playing every team in the English Premier League twice. It had never been done in the modern era- the only team to do it before in English football were Preston North End in 1888-1889. Arsenal managed it in the 2003-2004 season and to date nobody else has done it again.

In 2003 I turned twenty years old. I was old enough to go to the pub and young enough that all of my mates and I still went to watch every broadcast game, often rolling into work stinking of lager the next day. Looking back, that was the absolute high point of my time as not only an Arsenal fan but as a lover of football full stop, it was the perfect combination of vicarious sporting success, care-free friendship and freedom as a young adult.

We’d pile down to the pub on weekends or after work. Late comers would miss the first half of a lunchtime kick off because they were still hungover, or still out on the piss. We’d sit in the beer garden for hours after, eat crap pub food and at the time I don’t think any of us appreciated quite how lucky we were to have the two things coincide- our time together and that team, that team who will remain immortal as the Invincibles. One man, one brilliant, scholarly father figure spearheaded Arsenal’s transformation into the modern team.

It is easy to be wistful looking back. Films often try to sell you that sentimental, time of our lives crap about being teenagers on bikes one summer but that’s phooey, baloney, bullshit; being a teenager sucks. Having your own money, freedom from school's rules and with no real commitments was something that as a group we’ll never have again. That’s called getting older, it’s normal and there’s plenty to love about that, but good lord were we lucky as people and as Arsenal fans for those few years.

Arsene Wenger: Invincible, is a 95 minute documentary which for me and many fellow Gunners will be a brilliant reminder of that time. For non Arsenalites it is still a fascinating insight into one of the most transformational figures the sport has ever known and one of the most special, charismatic and skillful teams ever to lace up boots, but objectivity has to go out of the window here for me.

We bonded over the experiences watching games brought, every late goal, big win, nervous comeback when the pub went mad and drinks were spilled. Every time Will said “I’d have scored that for £60,000 a week”, or little Ben who was too young to drink talked about the latest boots the players were wearing with schoolboy delight. The moody pirate DVDs I’d buy from “Noodles” which were filmed in the cinema and not top quality like he insisted but I continued to purchase, and the many, many receipts stuffed in pockets with “The Railway Telegraph” printed on them the next morning. 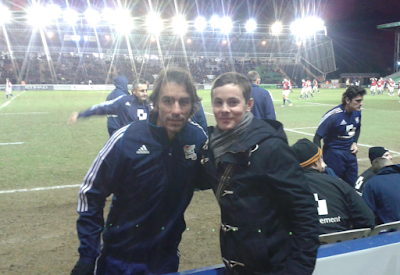 OMFG it's Robert Pires (and me)!
It felt like we became friends with the players and with Arsene, giddy like kids occasionally meeting the players in public. Arsene was someone for years we revered, trusted and loved. Most Arsenal fans still love him; he’s such an erudite, charismatic, unconventional character who stuck out like a sore thumb in the English game when he arrived. The film captures him perfectly, and enough time has passed that even his bitter rival, Manchester United Manager Alex Ferguson, even appears full of nice comments (fair play Fergie).
Wenger says in the film, that “at the end of every love story there is sadness”. He’s right, but this is only football, what Wenger’s Invincibles left a generation of fans with is something that like their achievements, will never be touched, more than football. Pride, love, friendship and memories of a time when everything seemed so perfect even when it wasn’t. In my head it was always a sunny day when Arsenal played that season. I know it wasn’t but it’s my life and I’ll remember it how I want; that’s how it felt.

Thanks for the memories.

You don’t have to be an Arsenal fan, but I imagine Arsene Wenger: Invincible is much more personal if you are. These were my formative years as a young adult and actually combined with always being in winning rugby teams, it took years to accept that you can’t win all the time. Whether that is good or bad I don’t know- I still don’t like losing but I am more accepting of it and understand there are more important things in life.

A very sensitive insight into one man’s addiction to football, winning and effect on an English institution which tried to resist him, but ended up emulating his every spectacular success. 8/10