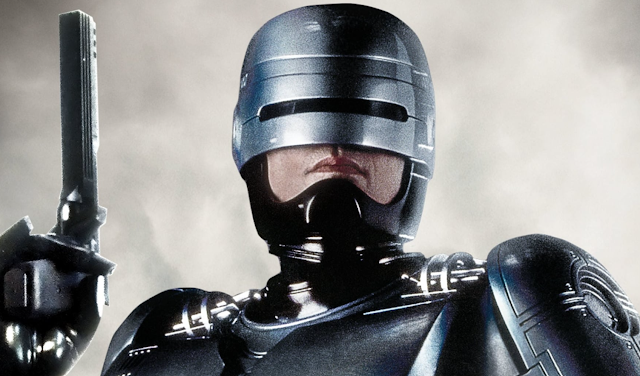 Sci-Fi/ Action Rated 18 Cinema Re-Release Spoiler Free
What else does a 38 year old man with a Friday night to himself do but book to go and see a classic Sci-Fi film, restored to glimmering 4K, alone?

I knew I loved RoboCop before going, so I wasn't too worried about enjoying it. What worried me was that normally when I go to the cinema alone I have a few drinks before and some during the film. Then more booze after and repeat the next day, film or not. Currently I am not drinking and while it sounds simple, don’t drink, this is very much breaking a trend. I like getting tiddled at the cinema. Sure you can’t pause for a piss but timing a cinematic slash is a skill, all part of the fun.

Not being half cut at least meant the 4K wouldn’t be wasted on my blurred vision, but this says a lot more about where I’m at with my relationship with booze than with the film.

The legendary Peri-Mortem Police Constable, played by Peter Weller, and his uber-violent escapades battling the greedy, despicable, villainous conglomerate hellbent on cynical profit which created him, burst onto the screen to my giddy delight. Paul Verhooven is celebrated for kitschy social commentary (see also Starship Troopers) and RoboCop was the Dutchman’s first English-language feature. It’s always nice when you go back to a film you think you know well and are reminded of elements which might have slipped from your recall. I’d forgotten that RoboCop is very, very funny.

The uber violent and absurd contrast with the frivolous yet sinister consumerism in the  hilariously juxtaposed commercials and news broadcasts in this dystopian Detroit. The action, bullet wounds and explosions are still Troma- level over the top, of course; like the rest of the film it is dated but in a way that’s its own, there’s nothing wrong with it and I wasn’t alone in wallowing in its decadence. Every part of my fanboy, geeky being was switched on and titillated throughout, comfy in the rather lovely reclining seats. The cinema was pleasingly filled enough to enjoy other people’s experience of the film but not be annoyed by their masticating, flatulent presence. Mostly.
Cinemas are a terrible place for dates, I have never understood why they’re used for that unless you’re a teenager hoping for some hand action in the back row. They’d be an even worse place to go on the pull, I thought, especially for this screening of RoboCop. It was truly sausage fest cinema with exactly the kind of people I’d get on with, but not want to fuck. For what it’s worth, nobody made a move on me so I’m hardly holding myself up as a beacon of silver-screen sexy, even in that crowd.

Maybe if I’d been pissed the beer goggles would have helped my horniness. I’ll never know, because I didn’t drink (yay me) and I enjoyed returning to RoboCop even more than I thought I would. If you can get out to a showing of this striking restoration, on a decent screen, I urge you to do so.

It is 35 years old this year, hence the upgrade and re-release, and nothing, nothing about RoboCop has rotted. This is deceptively smart satire told with violence and iconic brutality and catchphrases. I’d buy that for a dollar. 10/10