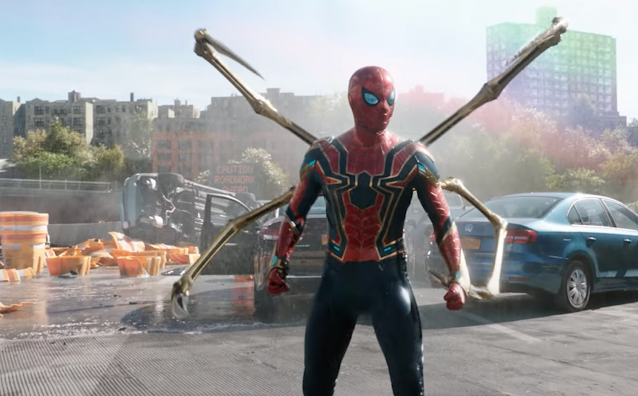 Ah Spider-Man, a return for Peter Parker and The Daily Bugle. My mate had a subscription to The Daily Bugle. Very expensive habit. Eventually I really enjoyed Spider-Man: Far From Home, and therefore had fewer reservations about this. I’d go into to the pros and cons of Marvel’s ongoing omnipresence but when you look at how uneven DC’s big screen efforts have been and allow for the fact that these are just a cinematic comic-book, and comic-books also go on and on and on, I’ve come to just kind of accept them. Ultimately you don’t have to watch if you don’t want to.

Why Spider-Man always has such problems getting home is a bit of a mystery- Homecoming, Far from Home, No Way Home. I’m really looking forward to the one where he’s old enough to drink- Spider-Man: Falls Asleep on the Last Train Home.

There were even questions I wanted answers to from the last film in No Way Home. Has his girlfriend MJ had a hot meal yet? Has his best mate Ned been outed as the thirty year old nonce in a wig, sliming into a school to perve on the kids he clearly is? Does Doctor Strange use Just for Men on his beard? The answers, not to spoil anything, are: no not yet, no not yet though the police have tapped his laptop and yes. 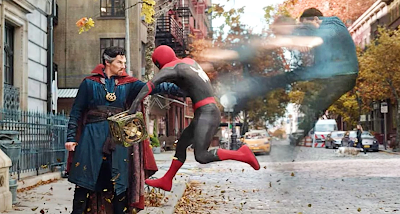 The teaser trailer gives away that some old foes appear and that the multiverse is involved; fans will have a clue what to expect from that and all I’ll say is that it adds some leftfield fun, and it is fun. I was worried that it’d end with an Avengers: Endgame character splooge and completely lose me, but it didn’t, rather it actually got stronger as it went on and I became more caught up in it. The multiverse is very trippy, weird and wonderful. Splendid mind-bending visuals that Peter Parker swings through with Doctor Strange spectacularly.

No Way Home has quips and jokes to keep it light, though there is some sadness and depth. Particularly Jon Favreau is very funny, and although he’s odd, Benedict Cumberbatch’s Doctor Strange I enjoyed having not seen his standalone film. The two and a half hours whistled by, No Way Home is a very enjoyable romp with Spidey. Romp’s probably the wrong word, unless you’re Ned. Creep.

While a superb bit of throwaway comic-book entertainment, I think Spider-Man’s story arc has run its natural course. This being the Marvel universe I doubt this will be the end, but those concerns are for another day. Spider-Man: No Way Home is a lot of fun if you like this kind of thing, which millions of people clearly do. 8/10