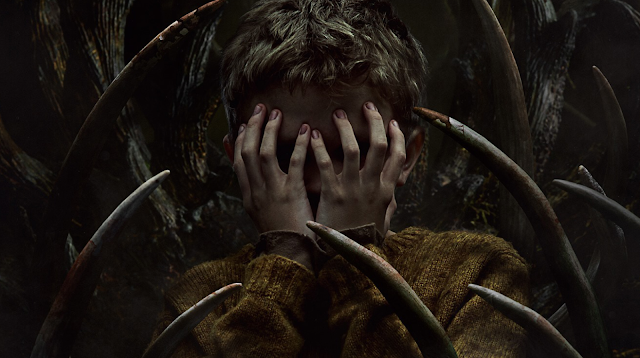 Antlers is set in a rural area of Oregon, frozen in the icy clutches of the OxyContin/ methamphetamine epidemic, which plagues swathes of the USA. Oregon currently has the fifth worst opioid problem of the fifty States. Unnamed, it is a drizzly, dour, decrepit, destitute town. Director Scott Cooper (Hostiles) has form portraying small town poverty, Out of the Furnace has a very similar setting and aesthetic. This is put to good use in Antlers, the area feels real and run-down; even happy people aren’t happy here.

A meek, severely malnourished and bullied twelve year old Lucas (Jeremy T. Thomas) has a secret, something going on. Lucas’s drawings and the accompanying story are clearly borne of some troubling experience, and teacher Julia (Keri Russell) sees this and wants to help the very disturbed little boy. Kerri has recently returned to the area and lives with her estranged brother, local Sheriff Paul (Jesse Plemons). Julia also has skeletons in her closet but in this place it seems everyone does. Closet, open. Bones, everywhere: to paraphrase Chandler Bing. 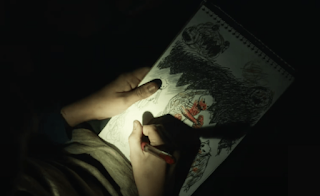 Antlers is very sincere and serious, and given the subject matter that could have worked against it, but it doesn't, the fact that it’s had so much attention paid to its creation and is excellently acted means it is able to move at its own pace. The film doesn’t feel the need to rush at you with the supernatural, the spirits which swirl, encircle and engulf the afflicted grow in status through the story. Ominously teasing the inevitable.

As well as being creepy, in the tense build up to the coming terror Antlers is also downright sad and depressing. Visually and emotionally the despair really helps the horror. Even without the mythical, malignant, murdering monster I wouldn’t live in this place. Hope died here a long time ago.

When Lucas’s secret is fully exposed and what is a drama-thriller really kicks into full blown horror, Antlers is nasty, mean, and unforgiving. The brooding build up launches into a satisfyingly bloodthirsty conclusion. I was fully involved and thoroughly appreciated how the film is structured and presented- realistic, grim social stasis descends into  grisly, stomach turning, fog covered fear and death.

A simple but hugely effective and affecting horror, Antlers might be a little predictable but is so well constructed and confident that I was captivated and crucially creeped out. A classy creature feature which is a must see for horror fans. Between this and Resident Evil: Welcome to Racoon City, 2022 has started well in the genre for me. 8/10