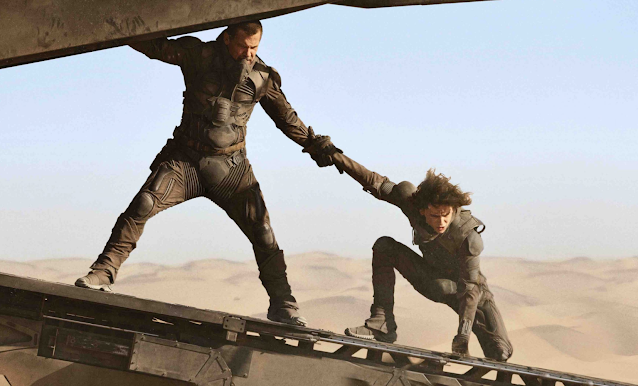 David Lynch’s 1984 version of Dune I think I saw as a student some years ago and my abiding memory is that I didn’t really get it, I certainly don’t remember the plot. I have never read Frank Hebert's novel that the film is based on (as well as countless spin-offs) but its reputation is that of a story which is borderline un-filmable. This Dune rode into my life on a wave of praise and a £15.99 fee.

Timothée Chalamet is something of a can’t miss actor for me, I’m a big fan of his. Denis Villeneuve as a director has made beautiful films with varying results where my interest is concerned. Incendies, Sicario and Prisoners are all great films. Blade Runner 2049 manages to be somehow astonishing to look at but so dull I literally fell asleep three times watching before giving up. It’s an unpopular opinion of mine but the Ridley Scott original Blade Runner is hugely overrated; it’s not bad but I don’t buy into its pop-philosophy. 2049 however is out and out dull.

Villeneuve’s Dune instantly carries itself very seriously and as all the varying “Houses” were being laid out I began hoping for some star based Game of Thrones. Chalamet’s character, Paul (there is another character called Duncan, both names stick out as astronomically bland among Thufir Hawat, Leto Atriedes, Stilgar etc.) is some sort of Prince who has borderline magical powers. The whole universe fights over a resource called Spice which fuels space travel or something. I was confused fast and it only got worse. So much of Dune is a contradiction; call it stylised if you want but when at a space gathering someone busted out the bagpipes the slippery slope of space-seriousness circled the drain.

That is important, because Dune takes itself very, very seriously. To its detriment.

There’s all kinds of cultural subtexts I gave up trying to interpret because I was still clasping at a story which struggled to find any kind of excitement despite a mammoth budget and lots of great actors. Films are supposed to be fun and Dune is about as dynamic as Immanuel Kant’s Critique of Pure Reason- impenetrable 18th Century German metaphysics which to its credit, does at least eventually make sense. Reading Kant is far more rewarding than watching Dune and I hated Kant at University. Not as much as I hated Heidegger though, and at least Wittgenstein proffered the Duck-Rabbit.

Just like German philosophy (except the Duck-Rabbit), Dune doesn’t have a sense of humour. There’s a fat bloke who dresses in black which is how you know he’s bad, I think, and because Paul is so skinny. Clearly fat guy in black stole all the meat as well as the spices.

For a clever film Dune is incredibly stupid: Paul’s father not doesn't let him do something because it was dangerous, but then later risks all their lives for no real reason. Also why the fuck do they have spaceships, lasers, canons and force fields but fight with machetes? Someone mentions that sandstorms can cut through metal but they take tents with them. The action is unsatisfying and I was ambivalent about any of the characters when it finally showed up.

At one point I thought “at least the credits will account for ten minutes of the runtime so there’s not as long left as it looks". When I accepted that I was really only still watching Dune because I’d splashed out £15.99 on it, I held out as long as I could then turned it off when I couldn't take anymore.

Doug Stanhope once posited that it’s sad when kids kill themselves because they haven’t given life a chance, but that if you’ve sat through two thirds of something and it’s sucked the whole way so far, chances are it ain’t picking up right at the end. I’m not saying Dune made me want to kill myself, I have a lot of other reasons to do that, but when a film is making you think of a suicide metaphor for it, that’s not a good thing.

I have had unpopular opinions in the past, but I stand by them until I don't. Check these reviews out!...