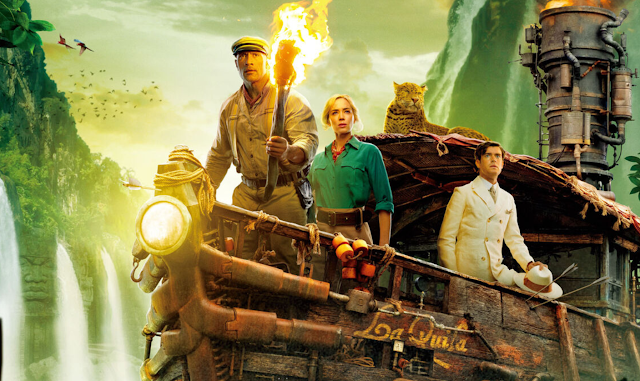 Have you seen Pirates of the Caribbean? Have you seen Jumanji? Have you seen Indiana Jones or any Dwayne Johnson film? If your answer is yes (it’s definitely yes) then I present to you Disney’s Jungle Cruise, an in no way derivative adventure film.

For a split second I thought I might see something approaching Indiana Jones, but that was quickly beaten out of me, Jungle Cruise lists far more towards popular port than starboard serious; even more so than Indiana Jones and the Kingdom of the Crystal Skull, less a crystal and more a vajazzle in Indy’s more sincere, storied, supernatural success chest.

The big budget and practiced patter of Jungle Cruise keeps it entertaining and the elaborate and slowly more supernatural story is engaging. The story? Oh, yes, apparently it's based on a theme park ride (I know), but there's a magic stone, treasure and a lot of jungle and cruising. Not that kind of cruising. There is nothing wrong with it though; Jungle Cruise wears its campy, throwback silliness proudly. Plus I want to go on the ride.

A good humoured adventure which is great fun in places. Realistically I was over aiming thinking about Indy. Above average, just, but something everyone can enjoy with lots of spectacular set ups and also Jesse Plemons hamming it up as a Nazi! 6/10